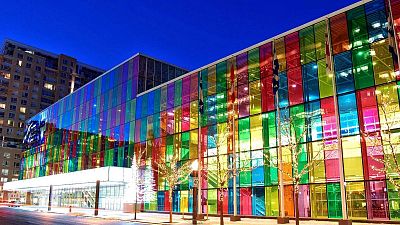 The material could be applied to entire buildings such as the Montreal Convention Centre.   -   Copyright  The James Dyson Foundation
By Lottie Limb  •  Updated: 26/02/2022

Solar panels that don’t require direct sunlight have been invented in another leap forwards for clean energy.

Carvey Ehren Maigue, 29, won the James Dyson Foundation Sustainability Award in 2020 for the panels he constructed at Mapua University in the Philippines.

As they do inside crops, these particles absorb the sun’s ultraviolet rays and turn them into visible light. The panels are then able to convert this harvested light into electricity.

Ultraviolet rays still reach us on cloudy days, meaning there is huge potential to scale the technology up in urban areas - as well as in other places that a conventional solar panel wouldn’t sit.

Inspired by auroras and called AuREUS, the particles are placed in a resin surface which can be moulded into different shapes.

The new solar material could even be fitted to our clothes

Discussing his invention in 2020, Maigue said he wanted to bring the product to the market immediately while also investing in further research.

“I want to create threads and fabric so that even your clothes would be able to harvest ultraviolet light and convert it into electricity.”

The prototype was a three-by-two foot panel installed in a window of Maigue’s apartment, capable of generating enough electricity to charge two phones each day. But he has ambitions to clad whole buildings in AuREUS, turning them into vertical solar farms.

Despite not facing the sun, skyscrapers with this exterior could absorb UV that bounces off walls, pavements and other buildings.

“We are also looking to create curved plates, for use on electric cars, aeroplanes and even boats,” he told the Foundation.

The electrical engineering student added that he wanted to democratise his new product. “AuREUS has the chance to bring solar energy capture closer to people,” he said.

“In the same way computers were only used by the government or the military and now the same technology is in our smartphones, I want solar energy harvesting to be more accessible.”

The new technology has strong sustainability credentials from start to finish.

“We upcycle the crops of the farmers that were hit by natural disasters, such as typhoons, which also happen to be an effect of climate change,” explains Maigue.

Of 78 types of local crops tested, nine showed high potential. These are crushed, juiced and filtered to extract the luminescent particles, which are then suspended in resin.

The resulting material can be moulded into cladding and clamped to walls, or sandwiched between two panes of double glazed window to start generating renewable energy for the building.

It does this by reflecting the converted light to the edges of the panel, where strings of regular photovoltaic (PV) cells are waiting to capture and convert it into electricity.

One area for improvement is moving from 80 per cent fruit and vegetable sources to 100 per cent, skipping chemical ones completely. Among the five colours used - red, orange, yellow, green and blue - a natural alternative for the blue dye has yet to be found.