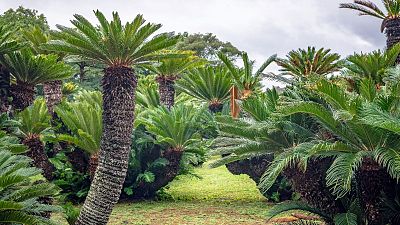 Cycads flourished during the Jurassic period and were previously found all over the world.   -   Copyright  Getty Images/MasaoTaira
By Lottie Limb  •  Updated: 21/01/2022

An ancient plant that dinosaurs used to roam among may soon go extinct because of a group of avid collectors.

Cycads, the world’s oldest seed plants, are being poached on a par with rhinos and elephants, analysts at the Global Initiative Against Transnational Organised Crime (GITOC) have warned.

This illicit trade is being disguised within a legal market for cultivated varieties, providing cover for traffickers and the wealthy collectors who want to implant rare cycads in their gardens.

“Owning a rare cycad displays wealth and intelligence in a way owning luxury cars does not,” one source told the Geneva-based network of crime analysts.

South Africa is a hotspot of cycad diversity, supporting 38 species - 29 of which are found nowhere else in the world. Now, they are at risk of being ‘loved to death’, with three already extinct in the wild and half of those remaining heading towards the same fate, according to the Global Initiative’s latest risk assessment.

What are cycads and why are they so popular?

In Cape Town’s national botanic garden, the rarest cycad is kept in a cage to prevent poachers from digging it up, following a cycad raid in 2014.

The plants have a prehistoric kind of appeal, with huge seed cones and a girthy presence; they can live for a thousand years by producing new offshoots from the base of their trunk.

“Some of them are quite attractive,” researcher Daniel Stiles tells Euronews Green, “especially when they’re laid out in landscape gardens, and quite commonly these collectors do have their own landscape gardens.” The illegal wildlife trade investigator has visited a number of these in South Africa.

But really it’s a vicious cycle that is closing in on the cycads. The scarcer they get in the wild, the more their value soars, and an obsession akin to that for orchids sets in, explains Stiles.

Of more than hundreds of cycads confiscated by police in the Eastern Cape province over the last few years, every single one was on the International Union for the Conservation of Nature’s red list, “demonstrating a clear market preference for threatened species.”

How does the illegal market work?

The pandemic has not slowed horticultural crime. Cycads worth around US $1 million (€880,000) were stolen in just six months of 2021, according to authorities in the Western Cape.

Very little of this money reaches the people responsible for harvesting the plants, says the Global Initiative. Some poachers have reported being hired on false pretenses - “to cut down trees,” as one incarcerated poacher told TRAFFIC - and earn little more than €35 per job.

More experienced poachers go on to become ‘recruiters’, hiring other people to chop down cycads. A retired police officer indicated that “rich collectors” in Gauteng province, which includes Johannesburg and Pretoria, are driving demand.

Some buyers launder the plants through their nurseries, claiming they were propagated there and so enabling them to be legally bought or exported. Porcupine bites and marks where they were crow-barred from the ground are tell-tale signs of their real origins, however.

Traders have justified their role by arguing that, if left in the wild, the plants would be harvested for medicine, says the Global Initiative. But the medicinal market is far smaller and less damaging to cycad populations than the horticultural trade.

What can be done to save the cycads?

Micro-chipping plants and spraying them with invisible paint are not deterring poachers, who have stayed one step ahead of authorities by x-raying the plants and digging out chips.

Researchers from the University of Cape Town have hit upon a more ingrained technique - identifying wild cycads using radiocarbon dating which gives a ‘hyper-local’ stamp of where they grew.

But preventing poaching in the first place is still a thorny problem. Stiles suggests that ‘the rarest species [could] be propagated by a non-commercial facility and made available for purchase at reasonable prices.

“Eventually enough of the collectors will have their own that there will be no rare species anywhere, except in the wild. Why buy poached from the wild at high prices when you can buy affordably elsewhere?”

Cycads are not a keystone species and their extinction would not have a major impact on the ecosystem. But they have an intrinsic value, and the loss of this “living dinosaur in the plant world” would be a terrible shame, he adds.