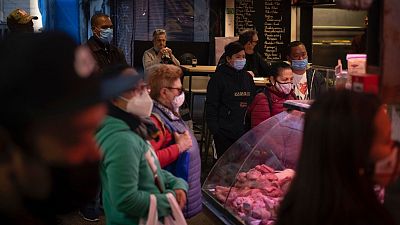 As Veganuary gets underway, people around the world are attempting to reduce their meat consumption. And one government minister, Alberto Garzón, is promoting a plant-based diet to a tough crowd.

Garzón urged Spaniards to reconsider how much meat they’re eating in a recent interview, bringing attention to its environmental impact — especially the production of beef by industrial mega-farms.

But his comments have not gone down well with all his fellow Spanish citizens. A furious backlash from the meat industry has forced the government to distance itself from the consumer affairs minister’s comments, the Guardian reports.

It may go some way to proving Garzón’s point: that while many people in Spain know that greenhouse gases are a major contributor to climate change, they often “link it to cars and transport”, sidelining the role of agriculture.

This is despite the UN's Food and Agricultural Organisation reporting that meat and dairy account for around 14.5 per cent of global greenhouse gas emissions.

“It was only very recently that everyone started to look at the impact of the animal consumer chain and, especially, at the impact of beef. Other countries were pretty advanced on that but in Spain it’s been a taboo,” Garzón said.

He doubled-down on his comments this week, after government spokesperson Isabel Rodríguez said he had spoken in a personal capacity.

“What I said, I said as the minister of consumer affairs. There’s no other way of seeing it,” he told the Spanish radio station Cadena Ser, adding that his comments were “flawless”.

How is climate change impacting Spain?

The Mediterranean region is especially vulnerable to climate change due to its rapid warming and precipitation decline.

The increased concentration of greenhouse gases has accelerated rising temperatures in Spain, with the country's rate of warming rising a cumulative 1.3 degrees Celsius in 60 years, according to a report by the Spanish weather agency Aemet.

Throughout the summer of 2021, wildfires caused by extreme temperatures raged across parts of the country. Hundreds of residents were evacuated from Ávila in August, and some 1,054 people evacuated from the resort of Estepona and the town of Benahavis in September.

“If we don’t act, it won’t just be climate change we’re dealing with – it’ll be the triple crisis: the loss of biodiversity; pollution, and climate change,” Garzón said.

“It would be the end for a country like Spain. Spain is a country in the Mediterranean basin – it isn’t the UK or Germany – and desertification is a very serious problem for our country, not least because it depends so much on tourism.

“Visiting a desert isn’t quite as attractive as visiting the Costa del Sol.”

Why eating meat is bad for the environment

The production of meat has a negative impact on the environment for many far-reaching reasons, including deforestation and the loss of biodiversity due to the sheer amount of land and water required to raise livestock.

Livestock also produce vast amounts of the powerful and destructive greenhouse gas methane. In total, Our World in Data calculates that beef produces a global average of 110lb (50kg) of greenhouse gases per 3.5oz of protein.

Garzón spoke of the detrimental impact of so-called megafarms in particular, which he said, "find a village in a depopulated bit of Spain and put in 4,000, or 5,000, or 10,000 head of cattle. They pollute the soil, they pollute the water and then they export this poor quality meat from these ill-treated animals.”

Spain eats more meat than any other EU country, with an average of more than 1kg of meat being consumed a week, which equates to the slaughtering of 70 million livestock each year to produce 7.6 million tonnes of meat.

From Jamón to Fuet to Chorizo to chuletón, meat-eating is a big part of Spanish culture, which perhaps explains the backlash Garzón has received since launching his ‘Less meat, more life’ campaign in July, leading to indignant responses from cabinet ministers and six meat-producing associations.

Even the prime minister, Pedro Sánchez, scoffed at Garzón’s suggestions, saying, “Speaking personally, a medium-rare steak is hard to beat.”

The agriculture minister, Luis Planas, also rebuked the campaign, saying the farming sector was being subjected to “profoundly unfair criticisms when it deserved respect for the honest work it does for both our food and our economy.”

Garzón has since clarified that he is not calling for Spaniards to stop eating meat completely, but suggesting they reduce their intake for both health and environmental reasons.

“Other countries – like Germany, the UK and France – are well ahead of us on this. This was the first time in Spain that someone in the government was saying what the scientists have been saying for a long time.”

Why are French activists filling golf course holes with cement?