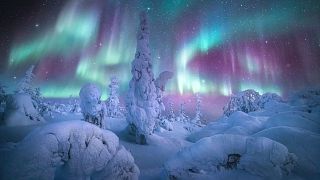 As we approach the longest nights of the year and the skies set the stage for nature’s time to shine, the winners of the 'Northern Lights Photographer of the Year' have been published.

Travel photography blog, Capture the Atlas, has selected 25 of the year’s best shots of the colourful light display that illuminates the skies of polar regions around the Arctic and Antarctic. These natural, polar lights are known as the aurora.

The phenomenon is caused by solar winds hitting the magnetic field around the Earth. When the electrons and protons from these solar winds hit particles in the planet's atmosphere, they release energy. It is this energy that causes the aurora.

What you need to be able to witness the Northern Lights is a dark sky with minimal light pollution.

Besides the time of year, what you need to be able to witness the Northern Lights is a dark sky with minimal light pollution, so getting away from large cities and populated areas is a must. To truly capture the beauty of the northern lights, these photographers had to venture deep into the polar wilderness.

Check out some of our favourite images from the Northern Lights Photographer of the Year along with some comments from the photographers themselves below:

“For the Northern Lights”, Aleksey R.

"Nature is mysterious and unpredictable, and often leaves us open-mouthed at the inexplicable manifestations of its power. This image was captured in February in Teriberka, in the Kolsky District of Murmansk Oblast, Russia, on the Barents Sea coast," says Aleksey R.

"This night was definitely special. The perfect conditions for shooting the Northern Lights came together: frost, ice, a full moon, a clear night, and no wind. The weather was extremely difficult; the temperature was 34 degrees below zero, but flames like these make you forget the temperature.

Thanks to the moonlight, the landscape was nicely illuminated, and I got a decent balance with the overwhelming display of the aurora borealis.

Nature is mysterious and unpredictable

"The solar storm that wasn’t but was: the events that unfolded from November 3, 2021 into November 4, 2021 will stay with me forever," explains Marybeth Kiczenski.

"The aurora sparked on this night was from a combination of an M-class solar flare and a CME; on their own, they were not much, but together, they sure packed a punch.

I went to a location I had never been to before – which is always a gamble – but made it work somehow! Hunting for compositions in the dark is always a challenge. The amount of colour detail in this image is amazing. I’ve never seen so much teal and purple. The whole night felt like a dream."

"This image is the perfect representation of one of my best nights seeing the Northern Lights in Norway in Senja," says Frøydis Dalheim.

"The views were stunning, with snow-capped landscapes, spectacular mountains, and a dancing aurora that coloured everything green. The conditions were perfect this evening in March, not too cold. The Northern Lights appeared not long after I arrived and lasted for a long time. I returned home really happy and grateful for this amazing experience."

"One month into the eruption of the Geldingadalir volcano in Iceland, I was thinking a lot about whether it would be possible to photograph the aurora above the eruption. I tend to think of it as the holy grail of photography in Iceland. It’s a once-in-a-lifetime capture," says Jeroen Van Nieuwenhove.

"That night seemed like one of the last opportunities we would get before the nights got too bright again. While the cloud coverage forecast was not looking particularly good, I decided to go up to the eruption anyway and try my luck. The clouds started opening up, and suddenly I noticed the aurora was faintly dancing above.

The clouds started opening up, and suddenly I noticed the aurora was faintly dancing above.

I decided to put down my tripod and wait to see what, if anything, would happen. After about an hour, the lights suddenly became very active. I couldn’t believe my luck! I took shot after shot while just staring at the event that unfolded before me."

"The full spectrum of the Northern Lights over the iconic “Vestrahorn” location in Iceland.

What a dreamlike experience! A G3 (strong) geomagnetic storm hit the earth on October 31st, 2021, and produced these wonderful colours," says Stefan Liebermann.

“Forest of the Lights” – Marc Adamus

"Temperatures are often in the minus 30s and negotiating the easily broken, crusty snow on snowshoes with nothing but a headlamp makes for great challenges in hiking and composing. I used the last light of twilight to set up the shot you see here and returned to it hours later as the lights were dancing overhead."

You can see the full list of winners and read the stories behind how the photos were taken here.

Indigenous groups team up with the government to protect the Amazon