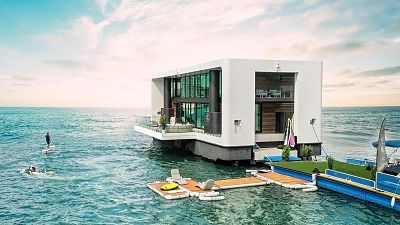 Ever dreamt of leaving the city for a life at sea?

This liveable yacht could be the answer to your prayers.

Boasting 400 square metres of living space, plus a swimming platform, this emission-free home harvests rainwater from the roof and generates green energy through 36 kilowatt solar panels.

Miami-based firm Arkup are behind the project, promising would-be sailors an eco-friendly, hurricane-resistant vessel that offers all the mod-cons of a luxury apartment.

City-dwellers can moor the Arkup 75 in local marinas, or head off to remote backwaters and live sustainably off-grid.

Built-in solar panels generate enough energy to power the boat’s lighting and air-conditioning systems, while the vessel’s electric engine is capable of cruising over 32 kilometres on a single charge.

It can even be delivered fully furnished, with bespoke interiors available for each client’s tastes and needs.

The floating home comes equipped with a 22 metre glass wall, as well as four bedrooms, four and a half bathrooms and an open plan Miele kitchen.

The rectangular yacht also contains four hydraulic ‘spuds’ that can be deployed in shallow water to lift the structure above stormy seas.

How sustainable are superyachts?

The Arkup 75 is not alone in the world of eco-friendly boats, but it’s definitely in the minority.

There are now over 10,000 superyachts worldwide, producing a total of 284 million kilograms of carbon dioxide every year.

That's nearly as much as the African nation of Burundi.

A 2019 study entitled 'Measuring the Ecological Impact of the Wealthy: Excessive Consumption, Ecological Disorganisation, Green Crime and Justice', points to owners of ultra-luxe vessels as some of the biggest culprits in the world’s growing carbon emissions crisis.

The industry is now keen to develop sustainable solutions to stay afloat in an increasingly carbon-conscious marketplace.

Boats such as the Arkup 75 are at the forefront of this movement, providing alternatives to their gas guzzling predecessors.

But while the €4.8 million vessel may not be within your price range, there are other options for those seeking sustainability on the waves.

Swapping the city for the water

With many people keen to swap city living for life on the water, eco-friendly superyachts are not the only option when it comes to sustainable boat-based homes.

For those with a more modest budget, canal boats have become a popular alternative to traditional dwellings in many European cities.

An estimated 15,000 people in the UK now live on the water, according to the Canal and River Trust - a number that has risen dramatically in the last few years due to rising rent and house prices.

And while these vessels may not contain the luxury of the Arkup 75, many argue that they are just as sustainable in their own right.

A study on the environmental impact of household consumption highlighted that over 60 per cent of global greenhouse gas emissions derive from houses on land. As one of the main factors affecting carbon emissions was size, tiny homes such as canal boats can improve the ecological footprint of those who live onboard.

“I do think living on a boat is sustainable because in general, you are living in a smaller space and being more careful with your use of resources”, says Lucy, a canal boat dweller from Belgium.

“The boaters I know seem more environmentally aware and mindful of reducing their waste.”

And with more boats on rivers and canals than in the 18th century, one thing is clear: life on the waterways is here to stay.

Watch the video above to see the liveable yacht in action.