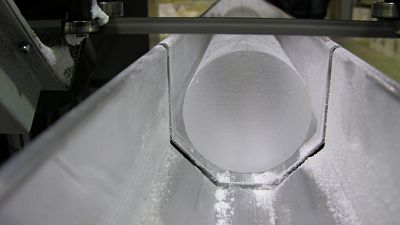 Scientists are preparing to drill into Antarctica’s oldest ice to uncover a 1.5 million year record of climate change.

Tiny bubbles of air are trapped within this ancient frozen archive and these pockets offer a snapshot of Earth’s history. The ice contains information stretching back over a millenia, charting temperature changes and the composition of the atmosphere.

Using the core of ice they extract, researchers will be able to work out the volume of greenhouse gases, like methane and CO2, that were present in the past.

It is hoped that this information will give the team clues about how the Earth will respond to rising temperatures. The roughly 3km core of ice may also help explain the frequency at which the planet flipped in and out of ice ages in the past.

This data could be essential for those modelling the future of climate change.

“During our previous EPICA (European Project for Ice Coring in Antarctica) project, which ended in 2008, we managed to extract and analyse an 800,000-year-old ice core,” says lead scientist Carlo Barbante.

The data that came from this first sample of Antarctic ice has already proved to be essential for scientists modelling climate change. It revealed that as temperatures fell and the Earth experienced an ice age, greenhouse gas concentrations in the atmosphere went down. Once the climate began to warm again as part of this cycle, CO2 began to rise.

These cycles happen once every 100,000 years on average, but there have been times deeper into our planet’s history when it was much shorter. And the researchers are trying to figure out what causes this shift.

“Now we are trying to travel back further in time: because if we are to gain a correct perspective on what the world is currently experiencing with climate change, and adopt suitable mitigating strategies, we must look back even further.”

Drilling in one of the most hostile places on Earth

Known as Beyond EPICA, this project has been funded by an €11 million grant from the European Commission. Experts from 10 European Countries and 16 different research institutes have come together to research this ancient Antarctic ice.

Drilling is set to begin this year and, if everything goes to plan, the team says it could take another five years to collect and analyse the samples from this deep hole in the ice. The first location they are testing is at Little Dome C on the east of the Antarctic plateau - one of the most extreme places on Earth.

✖️This will be the place: the exact point of the extraction of the Beyond EPICA core.
We are thrilled! pic.twitter.com/OaF85CMDLO

Glaciologists, engineers and technicians will be working 3,233 metres above sea level and will experience summer temperatures of -35C.

I am confident that we will recover ice substantially older than the 800,000 year record.

“Finally, after several years spent searching for the best site for the drilling, and a delayed start due to COVID restrictions, we are finally getting underway drilling for the oldest ice core at Little Dome C this year,” says Dr Robert Mulvaney an ice core scientist from British Antarctic Survey.

“Time will tell whether we have chosen well, and it may take us four years to drill to the bed, but I am confident that we will recover ice substantially older than the 800,000-year record.”