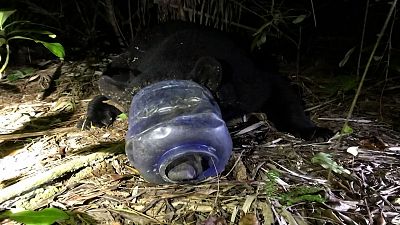 This bear was wandering in Florida, US, for weeks on end with a plastic container stuck on its head, until local authorities came to the rescue.

The animal spent 28 days trapped in what was thought to be part of an automatic pet feeder. Then after the first sighting in Collier County, bear biologists, law enforcement and bear contractors set traps and monitored the area. But the bear did not appear again for over three weeks.

Finally, she reappeared on a resident’s security camera, still wearing the container on her head.

A biologist from Florida Fish and Wildlife Conservation Commission's eventually managed to trap the 113kg female bear on Sunday 14 November. After having the container removed from around her face, the bear suffered some injuries but all in all, she was lucky.

The Florida Fish and Wildlife Conservation Commission stated in a Facebook post that the bear was in great physical shape. She did have a wound encircling her neck and face where the feeder was stuck, but the staff cleaned the injury and treated her with antibiotics. After a day and a half of monitoring to make sure she was healthy and able to eat and drink normally, the bear was released in a secure area of Picayune Strand State Forest.

Plastic pollution is a significant threat to wildlife in two main ways. Animals can become entangled and entrapped in pieces of plastic.

Even elastic hair ties can kill, just like they did in Australia in 2020 when a platypus was euthanised due to the depth of its wound.

Mistaking rubbish for food is also fatal and costs millions of animals' lives each year. Protected species such as turtles die due to ingesting large amounts of plastic like rubber bands, pieces of balloon and other rubbish that fills their intestines and leaves them unable to eat.

In December 2019, a dead sperm whale was found on a Scottish island with 100 kilograms of litter in its stomach.

Also in 2019, nine of the famous deer in Nara Park, Japan, died after swallowing plastic bags. And in 2018, a 40-year-old female elephant was found dead with about two kilograms of plastic waste in its bowels in a forest near the holy hill Sabarimala, India.

Leopards in the country were also photographed eating plastic near the Corbett Tiger Reserve. In the UAE, every 100th camel dies of eating plastic, a study found recently.

This bear was lucky

The bear in Florida had a lucky escape. For one, the container stuck on its head had a hole in it allowing access to some water and food. But even without that, "bears are physiologically able to cope with extended areas of reduced feeding," says Senior Veterinary Surgeon from NGO Animals Asia Shaun Thomson.

This is the period when bears are busy eating as many calories as they can find to prepare themselves for dormancy in winter. "So these factors are likely to be what protected the bear from truly serious or fatal consequences from this event," says Thomson.

In some cases, however, animals cannot be saved. "We have been involved in discussions in other similar cases with wounded bears where lethal force has been considered the most appropriate action by the authorities," says Thomson.

What to do when spotting a wild animal that needs help?

"If a member of the public found a bear going through a similar situation, they should make a GPS marker on their phone so that the sighting can be accurately located," says Thomson. They should then contact local wild animal rescues or environmental protection services to assist the bear.

"Most important is to protect human safety at all times, but there are ways to do this without using lethal force on the animal," says Thomson.

Watch the video above showing the rescue of the bear.

Hermit crabs are sexually attracted to plastic pollution in the ocean