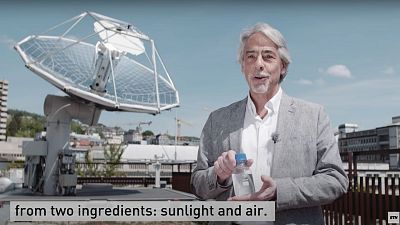 Is solar kerosene the future? Engineers at this Swiss University think so.   -   Copyright  ETH Zurich / Youtube
By Maeve Campbell  •  Updated: 08/11/2021

Aeroplane fuel can be made out of just sunlight and air, say scientists in Switzerland.

A new system has been created on the roof of ETH Zurich University where engineers are testing whether this type of fuel generation can work in the real world.

So is making plane fuel out of natural elements too good to be true - and how does it actually work?

The carbon neutral fuel is created in three steps. First, an air capture unit absorbs carbon dioxide and water from the air. Secondly a solar unit extracts energy from the sun, which then turns these elements into a mixture of carbon monoxide and oxygen (called syngas).

Lastly, the syngas is turned into a liquid which is used as fuel. And they’re calling it ‘solar kerosene’.

Although the system testing started in 2019, scientists confirmed this week that it is now “stable and reliable”.

The research, published in Nature, is being led by engineer Aldo Steinfeld, Professor of Renewable Energy Sources at ETH Zurich.

"This plant successfully demonstrates the technical feasibility of the entire thermochemical process for converting sunlight and ambient air into ‘drop-in fuels’,” he explains.

“The system operates stably under real-world solar conditions and provides a unique platform for further research and development.”

According to Steinfeld, the technology is now sufficiently ‘mature’ for use in the real world. But it will need funding to get there, especially as the carbon neutral fuel would be more expensive to produce than regular, polluting kerosene.

The system is part of a global attempt to help reduce the amount of carbon dioxide emissions that come from flying and shipping (currently 8 per cent).

Analysis of the entire process shows that the fuel would cost €1.20-2.00 per litre if it were produced on an industrial scale.

To put this into context, kerosene (regular jet fuel) costs only €0.40 per litre.

Desert regions with lots of sunshine are particularly suitable as production sites.

"Unlike with biofuels, whose potential is limited due to the scarcity of agricultural land, this technology enables us to meet global demand for jet fuel by using less than one percent of the world's arid land and would not compete with the production of food or livestock feed," explains Johan Lilliestam, a research group leader at the Institute for Advanced Sustainability Studies (IASS Potsdam) and professor of energy policy at the University of Potsdam.

And if the materials used to build the production facilities, such as glass and steel, are manufactured using renewable energy and carbon-neutral methods, emissions would further be reduced to close to zero.

Will solar kerosene be storming the market?

Solar fuels are currently not funded adequately by the European Union. So instead, Lilliestam says that the way for them to become mainstream would be for airlines to take charge themselves.

If they were required to get a specific share of their fuel from solar sources, say 0.1 per cent, they would become more marketable and aviation would become a lot greener.

The idea is that the quota would gradually increase until solar kerosene achieves “market breakthrough” and becomes the new normal.