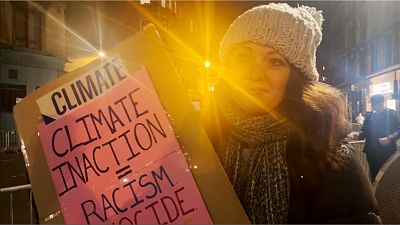 Protesters like Abigail are making their voices heard on the streets of Glasgow   -   Copyright  Euronews Green
By Marthe de Ferrer  •  Updated: 02/11/2021

Throughout COP26, we’re profiling some interesting people we meet here in Glasgow.

From volunteers to politicians to activists to scientists, we’ll bring you the breadth of people here at the UN climate summit.

We have to keep pressure on in any way we can.

Why do you choose to protest?

I feel guilty, I guess that this is the world that we've left him. He's 17, so he's getting to the point where he's still in kind of ignorant bliss. But eventually, he's going to want to think about whether to have children. That's something that young people can't just lightly consider anymore - how insane is that?

The planet is so unstable and the likelihood of mass genocide, which is what's coming from climate inaction, is so likely now that young people can't have children. They are terrified for their own lives and certainly wouldn't bring anyone else into this world.

We talk about climate change in the UK as ‘coming’, but it's not coming. It's here.

It’s here - especially in the Global South, and in communities that colonisation and capitalism have already massively depleted and murdered. Now they're having to deal with the climate crisis and they have not caused it. They are the lowest emitters now, and historically.

We need to think about acting on the climate crisis now. If we don't act on it, it's racism.

These are people, they’re Indigenous communities that keep getting murdered by capitalism, all for fossil fuel, and are now having to deal with the climate crisis too.

And it's all because of the way we live our lives. So if we don't act, it is actually mass genocide. It’s ecocide, because we're killing loads of species.

But most importantly, it’s racism - let's call it what it is.

Did you come into environmentalism gradually or was there a lightbulb moment?

I'm a management consultant. I worked in the City of London for most of my life, and I travelled to Switzerland every single week.

People used to say to me, “Oh, gosh, your carbon footprint must not be very great.” To be honest, I didn't know what they meant.

Then I was in central London and I met some Extinction Rebellion rebels. I started finding out what happened and I learned a lot there.

I realised how oblivious we as humans were.

I realised how oblivious we as humans were. I had this assumption that the government and corporations wouldn’t let us carry on doing what we were doing. That was a really, really silly assumption.

I cannot believe how much everyone - companies, governments all around the world - are lying to us and hiding it. It's insane and now I've learned too much - so I'm trying to rectify that.

But I was the same as everyone else, it was a huge shock to the system.

What are your hopes for COP26?

At the very least, we need to stop extraction now. We also need to look at the ways that we enable those economies that are so dependent on fossil fuels to have a just transition.

At the very least, we need to stop extraction now.

Like David Attenborough said yesterday, this could be the next industrial revolution that we need, and it will be great for the world.

Once we get away from fossil fuels and the dirty world that companies like Shell, Exxon Mobil and BP have created, I think it will be much more just.

But whether that happens, I do not know and that's why I'm here. I would love that to be the answer, but I'm sure the fight has just started.

How to feed your hungry vegan this Christmas