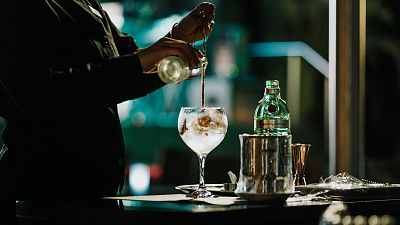 Oral historian Shanna Farrell began paying attention to where alcoholic spirits came from when working as a bartender. A beautiful bottle caught her eye and, when she checked the label, it said made with 100 per cent New York grain.

“I had never really seen that before, or even like an attribute to where something had come from,” she says.

With a background in environmental studies, she wanted to know more about alcohol’s impact on the planet. But her questions about ingredients were often met with confusion.

“I would ask the server or the bartender, hey, do you have an alternative to this, a different thing that I could have in this negroni and they would look at me like I had six heads.”

Despite being made from the same crops as many of our staple meals, it soon became clear to Shannathat the care many restaurants put into crafting their menus, did not extend to the bar.

It is the base crop that creates the alcoholic spirit, which often has the biggest environmental footprint. Many of these crops are grown in large volumes at high intensity.

“Take whisky for an example,” says Farrell, “It's made from this type of yellow dent corn that is grown in a number of states and a lot of people don't even know where it comes from.”

“But they want it because it's consistent and it has a high enough sugar content that it will be able to produce a decent whisky.”

Most corn grown in the US is this variety, creating monocultures that are harmful to the environment. And when you add on energy consumption, water, packaging and storage, you begin to see a problem.

The higher the alcohol content of the drink, the higher its environmental impact tends to be.

Farrell chronicles her visits to distillers who are challenging the status quo in her new book, A Good Drink: In Pursuit of Sustainable Spirits. She also discovered rural communities struggling with increasing demand for some of the world’s most popular spirits.

One of the most memorable chapters tells the story of mezcal makers in Guadalajara, Mexico.

Made from the agave plant, mezcal is the umbrella term under which tequila is classified. Woven into the country’s fabric, she writes, agave culture symbolises the relationship between the environment and the people of Mexico.

But this relationship is under strain due to the growing global appetite for agave spirits. Almost 352 million litres of tequila were manufactured in 2019 - a production increase of around 237 per cent in the last 24 years.

Agave growers have started to turn to industrial processes to keep up with demand, sacrificing water quality, soil health and risking disease along the way.

After hearing the opinions of people outside of Mexico, many of which “reek of colonialism”, she decided to visit Guadalajara. Here she met Pedro Jiménez Gurría, the founder of Mezonte, an NGO promoting the production of mezcal in a socially and environmentally conscious way.

It’s more about the people who care about tradition and understand the cycles of the lands.

“It’s more about the people who care about tradition and understand the cycles of the lands, even the moon cycles which are constantly used in farming in rural communities across Mexico,” he tells Farrell.

These producers often rely on rainfall to water their crops, harvest the agave plants by hand and take care of the entire distilling process themselves.

“They are doing a really great job with the ecosystem. They are keeping it small and it’s really clean and really round, and that’s what we are aiming for.”

Tradition and tasting the earth

More traditional methods of producing alcohol tend to be better for the environment too.

Farrell believes this is because they date back to before the second industrial revolution, when things were made on a much smaller scale. Even big distilleries used local ingredients and had closer relationships with the farmers that supplied them.

“And there's so much that, if you're using the same methods that were used for six, seven, eight generations, you can tell about the history of the place, and the traditions, the culture, and the environment as well.”

You really are tasting where things are grown. You're tasting the earth.

Losing the connection between field and bottle doesn’t just have consequences for the environment either. With the same base ingredients, there are fewer things that distillers can control to create a unique flavour.

Unlike other forms of alcohol, you don’t often see the crops that produce spirits growing alongside the distillery. Our enjoyment isn’t connected with the processes that create them.

“I think that's why wine is so popular is because of the terroir. You really are tasting where things are grown. You're tasting the earth.”

But producing spirits in a more conscious way doesn’t have to be limited to just a handful of small producers. Many larger companies are now beginning to understand the importance of making their processes greener and knowing where their ingredients come from.

“A lot of the places that I follow in the book are all small and independent,” says Farrell, “they all are retaining all the control over what's happening.”

But as these companies try to compete with the names that line the shelves of our bars, scale and consistency are ever-present problems for sustainability.

“That's why I wanted to address scale in the last chapter and how people are trying to think about; what's the impact of what I'm doing on the environment?”

_Shanna Farrell’s book A Good Drink: In Pursuit of Sustainable Spirits will be published in the UK on October 29th. Find out more here. _

How to keep your pets happy and healthy in a heatwave