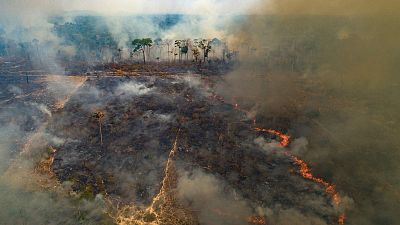 HSBC, BNP Paris and Deutsche Bank are some of the household banks investing tens of billions of euros in firms involved in deforestation, a new investigation shows.

Top financiers from the UK, EU, US and China have netted some €15 billion from deals with implicated agribusinesses since the Paris Agreement was signed in 2015, Global Witness has revealed for the first time.

This is despite these banks having their own environmental and human rights policies, which the NGO now claims amount to little more than “greenwashing” - demonstrating the need for external accountability.

With the EU set to announce a new law to tackle deforestation next month, campaigners are urging the Commission to cover financial institutions too.

“There is no more striking example of climate injustice than [Western banks] raking in eye-watering sums while they bankroll the destruction of the land, homes and livelihoods of communities who have safeguarded their forests for generations,” says Shona Hawkes, senior global policy advisor on forests at Global Witness.

“Banks are touting their green credentials with glossy voluntary policies and commitments, but our findings highlight that these amount to little more than pure greenwashing.”

Researchers analysed more than 70,000 share, bond, credit, and underwriting deals struck between financiers and 20 of the worst agribusiness companies between 2016 and 2020.

These firms all have reported links to the destruction of tropical forests and associated human rights abuses in Southeast Asia, Central and West Africa, and Brazil.

Who are the biggest bankrollers of deforestation?

New York based investment bank JPMorgan made $56.9 million (€48.9 million) from deals with firms that have fuelled rainforest destruction over the past five years, putting it top of the pile.

HSBC was the second largest privately owned bank in Global Witness’s data set, and the worst offender in the UK, despite having made a public commitment to stop financing firms accused of deforestation in 2017.

It provided £5.25 billion (€6.2 billion) of financing to some of the world’s worst deforesters, likely pocketing more than £27.8 million (€34 million) along the way.

HSBC’s investments account for more than half of all British deforestation financing analysed by the NGO.

In the EU, deal-making was dominated by big banks from the Netherlands, France, Spain, Germany, and Italy.

France’s largest bank, BNP Paribas, may have generated over €32.9 million in income from deforestation-risk agribusiness, while Dutch bank Rabobank may have earned an estimated €67.2 million and Deutsche Bank could have made around €12.4 million.

It’s hard to put an exact figure on the banks’ profits from these dealings, which often involve banks acting on behalf of third-party investors, Global Witness explains in its new report.

To calculate how much of a given investment may have financed the production or trade of beef, palm oil, pulp, soy and rubber, researchers looked at how much each agribusiness focused on these forest-clearing commodities.

What do the banks say?

HSBC told Global Witness its relationship with most of the agribusinesses was either not linked to forestry, palm oil or cattle, or that the relationship had ended or was in the process of ending.

BNP Paris denied the “assumption” and Deutsche Bank and JPMorgan declined to comment, while Radobank said it was “not willing to finance deforestation” and had put policies in place to this end.

The Dutch bank added that it favours “an engagement approach” with its clients to address any environmental or social concerns, though it has exited some relationships when progress has not been made.

Global Witness also quizzed other household banks over their stance on deforestation.

Barclays, Standard Chartered and NatWest are the next biggest British banks by investment size in the investigation, bankrolling destructive agribusiness firms by an estimated €3.14 billion, €2.52 billion and €488 million respectively.

Both Standard Chartered and Barclays - dubbed "Europe's dirtiest bank" - indicated they took the allegations seriously, with the former saying it would investigate the findings. NatWest declined to comment.