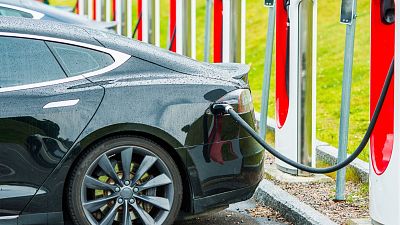 From the UK to the US, countries are beginning to officially phase out petrol and diesel cars in favour of an electric revolution. World leaders hope that this major transport change will help keep global warming within 1.5C of pre-industrial levels, in line with the Paris Agreement.

In Europe road transport is responsible for a fifth of carbon emissions, with cars making up the bulk of this number. However, sales of electric cars increased by 43 per cent across the globe in 2020, despite the pandemic and from 2022, 200 plug-in models will be available to purchase in the EU.

There are concerns over emissions from the manufacture of electric vehicles but research shows that over a life-time they have a net-reduction compared to diesel-engined cars.

Electric vehicles are similarly dogged by the question of longevity. The battery in an electric vehicle takes longer to charge than refuelling a combustion engine and currently have shorter ranges.

Batteries in electric cars can also be affected by environmental factors, which inhibit their performance, with research by Idaho National Laboratory finding variations in weather can affect plug-ins by up to 25 per cent.

Carinsurance.ae tested out a Tesla Model 3 to see where the engine has the biggest range, finding that when it comes to running an electric vehicle: warmer is better.

These are the top five cities in the world for getting the most from an electric engine.

Mexico City boasts the only royal castle in the Americas and places 5th for longest range of an electric vehicle.

This means on a full charge a Tesla Model 3 can make a journey from Mexico City to Tampico in the country’s North East. Mexico City has average temperatures of 16C which works perfectly for the battery in this model of an electric car.

One of two European cities that made the list, you could make it around Lisbon the same distance as from the Portugese capital to Rota, Spain.

The top 10 per cent of performers in Lisbon made it an impressive 447km.

The ancient Greek city could facilitate transport systems of the future, as electric vehicles are able to make it an impressive 351 km.

This is due to the city’s average temperature of 17.5C. The same range would take you to popular holiday destinations Malia and Kos.

Tied with Athens in both average temperature and average range, driving an electric vehicle in LA will get you almost the distance to Las Vegas.

This is good news for the climate-conscious state with 425,300 registered electric vehicle users currently.

Australia’s largest city is also home to the perfect temperature for an electric vehicle battery at an average of 18C.

Electric car users in Sydney can travel 351km in their vehicle, after one charge, the same distance from Sydney to Pampoolah, Australia.