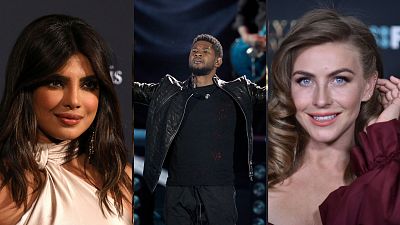 Pictures of the three hosts, Priyanka Chopra, Usher, and Julianne Hough.   -   Copyright  AP Photo
The opinions expressed in this article are those of the author and do not represent in any way the editorial position of Euronews.
By Jonny Walfisz  •  Updated: 17/09/2021

CBS has faced backlash for its new show ‘The Activist’, with social media users accusing the American TV company of trivialising activism. The online uproar has caused enough of a stir that the production company has now accepted the need to change the format.

After its start date/premiere was announced, the programme immediately caught flack for its potentially insensitive premise. Usher, Priyanka Chopra Jonas, and Julianne Hough are set to co-host the reality show that pits six activists against each other in tasks to promote their chosen “cause”.

Split into three teams of two, they will compete to have an opportunity to attend the G20 Summit in Rome. There, competitors will supposedly have the chance to meet with world leaders in an attempt to grow awareness and create funding opportunities for their cause.

The production companies Global Citizen and Live Nation are behind the proposed format which drew ire from activists across the globe.

“This show trivialises an incredibly complex, traumatic and often dangerous lifestyle choice that has led to deaths all over the world,” says Gina Martin, a British campaigner and writer.

“Organisers right now in Afghanistan are scared for their lives simply because they are female activists, and yet this show makes activism seem like a hobby you do for recognition.

“Pitting people against each other in order to win money to help people is one step away from making oppressed people fight for help. This is a gross departure from reality and the judges have no experience in grassroots activism either,” she continues.

What do activists and campaigners think of the show?

Many activists and campaigners took to Twitter to voice their outrage.

Communications director for The Frontline, a community activism group, tweeted, “TFW you thought there was a bottom & then the floor falls out beneath you.”

TFW you thought there was a bottom & then the floor falls out beneath you. https://t.co/NmuQyVYQYD

Others questioned the political alignment of the hosts. Twitter user AROOJ said, “This is sickening,” before questioning, “Are we in the hunger games? Individuals on this panel are questionable. Lol Priyanka Chopra supporting activism? What?”

“This is horrendous. Cancel the show before it even airs.”

Are we in the hunger games? Individuals on this panel are questionable. Lol Priyanka Chopra supporting activism? What?

This is horrendous. Cancel the show before it even airs. https://t.co/Z1ZODgmXHv

“Don't have anything to say about the activist comp because I've already said it, multiple times, and this is the logical endpoint of when capitalism subsumes 'activism',” wrote the politics editor at gal-dem, Moya Lothian-Mclean.

“The revolution will be televised, with Julianne Hough judging,” she added.

The revolution will be televised, with Julianne Hough judging

A potential competitor enters the fray

In an eye-opening thread on Twitter, 21-year-old activist Clover Hogan detailed her experience of being approached to participate on the show.

Hogan is a researcher on eco-anxiety and is the founder of the climate action group Force of Nature.

In the thread, she tells of a call the producers had with her in their search for “passionate activists who are actively engaged in making an impact in the areas of environment, health, education, and reducing world hunger.”

In the initial call, her questions about the process of creating the show were met with evasive answers.

I felt humiliated. The only explanation I have for not hanging up then and there is gaslighting.

When Hogan had a second interview with producers, she says the commodification of social causes and activism became starkly clear.

“When asked about my background, I mentioned growing up in nature, feeling heartbroken when I discovered documentaries, choosing to become an environmentalist at 11, moving to Indonesia, working with grassroots communities,” writes Hogan.

“Afterward, this dude looked irritated. He said I sounded like a robot, talking from a script. He asked me to do it over, this time with more emotion, and gave me pointers of ‘what the producers want to see.’ We repeated this several times; until I burst into tears.”

The producer said her response was “perfect”.

“I'd done what he wanted, apparently,” the young activist explains.

“I felt humiliated. The only explanation I have for not hanging up then and there is gaslighting. I kept thinking, Perhaps I'm just being dramatic. This is showbiz, right? He's just trying to help me communicate better. I chose to be here.”

How have The Activist’s creators responded?

In response to the backlash, a Global Citizen spokesperson says, “The Activist spotlights individuals who’ve made it their life’s work to change the world for the better, as well as the incredible and often challenging work they do on the ground in their communities.”

They add that it is not a reality show to trivialise activism.

“On the contrary, our aim is to support activists everywhere, show the ingenuity and dedication they put into their work, and amplify their causes to an even wider audience.”

In a new statement, Global Citizen added, “Global activism centres on collaboration and cooperation, not competition. We apologise to the activists, hosts, and the larger activist community - we got it wrong.”

“The show got it wrong, and I'm sorry that my participation in it disappointed many of you,” host Priyanka Chopra posted to Twitter.

“The intention was always to bring attention to the people behind the ideas and highlight the actions and impact of the causes they support tirelessly,” she wrote.

The show is now being re-tooled to document the work of the activists, instead of pit them against each other.

“It has become apparent the format of the show as announced distracts from the vital work these incredible activists do in their communities every day,” Global Citizen has said.

“As a result, we are changing the format to remove the competitive element and reimagining the concept into a primetime documentary special (air date to be announced). It will showcase the tireless work of six activists and the impact they have advocating for causes they deeply believe in. Each activist will be awarded a cash grant for the organisation of their choice, as was planned for the original show.”

View: Winning a Cannes award felt like a failure. So I returned it

The truth behind the EU Taxonomy: What counts as green investing?

As war rages, EU Green Deal finds itself at a crossroads | View

Climate change has a price: Water should too