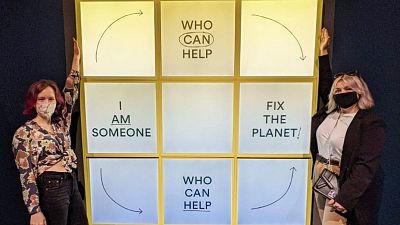 MA Student Mel Lester is studying Journalism at Falmouth University. Here she shares with us an insight into a group of young people taking on their generation's anxiety about the climate crisis.

Phoebe Hanson felt powerless, alone and afraid when she first learned about climate change as a teenager. Instead of giving in to feelings of despair, she has turned her own experience into a tool for helping other young people suffering from eco-anxiety.

As scientists warn the UK is unlikely to meet its Paris climate goals, an epidemic of environmental anxiety among young people looks set to grow.

But not if Hanson gets her way. She believes young people need to gain agency over their future by making their voices heard.

Aware that time is running out and with little sign that policy-makers are listening, Hanson has taken her message from the streets and school gates into the corridors of local politics.

The 25-year-old works with Force of Nature, a youth-run NGO, founded in 2019 by fellow activist Clover Hogan, 22. She helps run workshops in schools and colleges where young people can express their climate fears and know they are not alone.

“We want Force of Nature to be a movement for every young person who has felt overwhelmed when facing the climate crisis,” says Hanson.

Looking at the science behind the climate crisis, it can feel overwhelming.

The UK Climate Committee’s 2021 progress report warns the government has been too slow to deliver on climate promises. Its pledge to limit warming to 1.5°C maximum seems out of reach.

In August, the Intergovernmental Panel on Climate Change (IPCC) report warned the world is likely to exceed 1.5°C as early as 2040.

Eco-anxiety isn’t a sign of mental ill-health. It’s an understandable response to the threats of the climate crisis.

‘Eco-Anxiety’ is a term used to explain feelings of fear and hopelessness when presented with the science surrounding the deteriorating climate and the lack of change in fighting it.

“Eco-anxiety isn’t a sign of mental ill-health. It’s an understandable response to the threats of the climate crisis,” he says.

“If you take the science seriously and face up to facts, you’re going to be experiencing anxiety as a consequence.”

Eco-anxiety can have a significant impact on the lives of those who experience it.

“Any anxiety manifests itself physically, so when we are under stress, it will start impacting on diet, sleeping and our ability to focus,” Hartley continues.

A recent survey by the British Association for Counselling and Psychotherapy (BACP) found 66% of young people have experienced anxiety about the climate crisis, but feel powerless and unable to make a difference.

Eco-anxiety hits young people because the climate crisis will play out in their lifetimes. They know they will experience its effects and bear the burden of trying to mitigate it.

As a student of sustainability and the environment at Leeds University, Hanson says she had eco-anxiety - only then she had no name for it.

“Being told about the horrific things happening in the world with no reconciliation, I felt awful,” she recalls.

“I didn’t know then that it was eco-anxiety.”

Hanson is determined to help young people recognise these feelings for what they are and develop ways of dealing with them.

“We don’t want young people to feel like the entire responsibility for climate change is on them alone, so we look at where they can have the most impact without being overwhelmed,” she says.

It’s all in the mindset

The first step is understanding that a young person is not powerless but can have an impact on the fight against climate change.

To build this confidence Force of Nature holds three- stage educational workshops designed to help individuals turn anxiety into agency, navigate their feelings of fear and make a targeted plan for climate action.

Hanson is adamant a change in mindset is the first step, but it’s not happening fast or widely enough.

“When you think about current climate action, we’re not addressing the fundamental changes that we need to see. A mindset of powerlessness cannot make a difference,” she explains.

Removing the feeling of extreme pressure on the individual is essential, says Hanson. Young people may feel they must tackle the climate crisis, but the responsibility doesn’t lie primarily with them.

“The people in power who are - and historically have been - the most damaging to climate action, need to recognise their accountability,” she argues.

She wants to see young people act together with a realistic focus on goals.

“If you’re on your own, you’re going to feel like all the responsibility is on you,” adds Hanson.

“By joining the Force of Nature community, collective action can amplify your impact.”

The workshops help young people to figure out how they can learn new skills and focus their energy to fight climate change as a community.

Cara Trinidad, 21, from the Philippines developed a sense of agency after taking part in the workshops.

“Force of Nature is the perfect classroom setting for an eager environmentalist,” she says.

“By the end of the session, you have a renewed sense of power to create change.”

A seat at the top table

Hanson has taken her activism into local politics and is a member of the Manchester Youth Climate Change Board. She believes for young people to recognise they have the power to make a change.

More youth representation is needed in policy-making at all levels and they need to see their voices are being heard.

“We are not only listened to but are seen as a key stakeholder. We are heard, considered and not just an add-on.”

The Youth Board sends young people to the wider Manchester city council forum and set up a dialogue with local businesses to monitor their impact on climate.

We are not only listened to but are seen as a key stakeholder. We are heard, considered and not just an add-on.

“The Youth Board is a respected partner with equal footing and …the Climate Change Partnership is expecting to embed the youth board’s policy ambitions within its work,” he explains.

“I see lots of young Green Party members who want to be politically active before they’re 18, but society feels like it’s saying - wait.

“The action young people want is getting more and more to where the Green Party have always been, and it’s great if they’re seeing the party as a way to start making changes.”

Hanson’s voice may be heard in Manchester, but success at a local level has not yet translated into ambitious climate action from world leaders.

Frustration, fear and anxiety remain. Young people at the ’MockCOP26’ virtual meeting in 2020 called on ‘each country [to] provide necessary funding for child-friendly mental health services’ which directly targets eco-anxiety.

Ahead of the COP26 conference in November 2021, Force of Nature is determined to have the voices of young people heard.

“We don’t have access to Boris Johnson,” says Hanson.

“We have access to petitions, lobbying, marching in the streets and starting NGOs like Force of Nature.”

Force of Nature aims to bring youth voices to COP26, partnering with the New York Times to program events on the conference sidelines. The activists will feed the results of a research project on public attitudes to climate direct to conference delegates.

They also want to use the event to launch their list of businesses working to ensure young people’s voices are heard in the climate decision-making process. Young people are gaining the confidence to demand a voice in policy-making, which is where they belong, says Hanson.

“We’re going to make sure young people feel empowered as a community of changemakers and that businesses make room for these amazing young people in their decision-making.”

She wants to ensure that the opinions of young people are considered at the forefront of future climate plans.

This article is a part of a 2021 series between Euronews Green and Falmouth University.