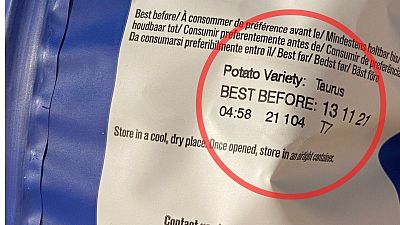 More than half of European’s don't fully understand the dates on food labels, contributing to the yearly waste of 88 million tonnes of both edible and inedible food. This is equivalent to 173 kilos per person and is estimated to cost €143 billion.

A better understanding of date markings on food could help reduce up to eight million tonnes of food waste in the EU every year, according to the European Commission. Misunderstandings of food labelling represent 10% of total waste across the bloc.

Click play on the video player above to watch our explainer on date labels on food, learn about the differences between "use by" and "best before", and start throwing away less food.

In a 2015 study, the EU’ Flash Eurobarometer 425 asked Europeans if they knew what “use by” stands for. More than half got it wrong. Meanwhile, some 33 million people in the EU cannot afford a quality meal every second day.

Originally date marking was introduced as a stock control system for retailers to survey the freshness of the products they sell. But over time, date labelling has become a food safety tool.

Nowadays, durability dates exist to give consumers an indication about the safety and quality limits of the food they buy. However, research suggests a substantial confusion between the two most common date labels: “use by”, and “best before”. The former, “use by”, is more strict and advises on food safety; and the latter, “best before” is more flexible and advises on food quality.

Andrea Segrè, a professor at the University of Bologna and food waste expert says that the first step to preventing food waste needs to start from food education initiatives around date marking, but also by intervening in making labels and making their differences crystal clear.

The Italian professor suggests there could also be an issue linked to translations. In some languages, the difference between “use by” and “best before” does not seem to be clear enough.

As called for by the new Farm to Fork Strategy, the EU’s new initiative for a fair, healthy and environmentally-friendly food system, the European Commission will propose by the end of 2022 a revision of EU rules on date marking.

“You use natural resources to then waste it, and pay a tax to destroy something that could be eaten.”

The 8 ethical chocolate brands to buy for guilt-free gorging

Saving food to save the planet: European initiatives take on food waste

What does "organic" really mean when we talk about organic food?