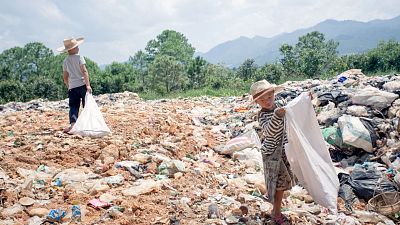 The European Green Deal (EGD) has come under fire by campaigners for excluding racialised people and perpetuating “green colonialism” in the Global South.

People of colour-led Equinox Initiative toward Racial Justice are calling on EU leaders to make their environmental framework more inclusive of racial justice.

They argue that by excluding race from its policies, the EGD fails to account for the impact of its action plan on communities of colour.

Launched in 2020, the European Commission’s set of policy initiatives were set out with the goal of achieving climate neutrality in 2050, including targets on eco-innovation, farming, and carbon.

Key players within policymaking have praised the deal, describing it as a “silent revolution” for the European green economy.

Climate change does not affect all communities in an isolated manner

It is not uncommon for racialised communities in the Global South to experience higher rates of energy poverty and health inequalities worsened by the climate crisis.

In fact, Equinox argues the exploitation of marginalised people underpins many of Europe’s climate solutions as they fail to recognise the expertise and solutions readily available from these communities.

There are long-standing problems with unequal access to energy sources - it is estimated that 1 billion people globally have little to no access to electricity, the majority of those living across Africa.

Similarly, global wastage from Western countries often finds itself on the shores of Asian territories such as the Philippines, whose citizens are expected to capitalise on removing and recycling the rubbish without the same infrastructures adopted by the nations doing the damage.

The Global North is only just beginning to recognise these inequalities. Equinox argues that recognition is not yet being achieved by the EGD even with regards to its own continent.

“In Europe, racialised communities are overly exposed to and situated in polluted environments that significantly impact their health and wellbeing,” reads their report.

“For instance, in the UK, research shows that Black communities in London are more likely to be situated in areas of high pollution due to hindering socio-economic systems that encourage the high proportion of Black residents situated in toxic environments, 12 so-called hotspots.

“Marginalised communities carry an additional financial burden due to the associated health costs.”

? We have launched our newest paper "Towards Climate Justice - Rethinking the European Green Deal from a racial justice perspective"

Check out the explainer of our main findings on how to ensure EU climate policy equals racial justice. ?? pic.twitter.com/WXeagZ5xMD

Their report recommends the following actions are taken:

“Racialised people - in Europe and across the Global South - are on the frontlines of the impact of climate change,” a representative for Equinox tells Euronews Green.

“However the EU’s Green Deal overlooks this and Europe’s historical responsibility for the climate crisis. We are calling on the EU to take a racial justice approach to its climate policy and chart a new path of green policy that centres racialised people.”