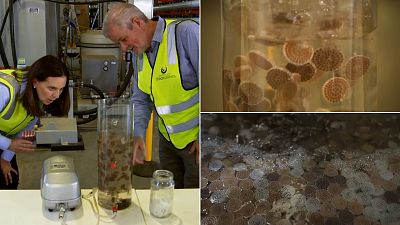 A superbug which eats sewage has been grown from scratch at a plant in Queensland in an Australian first.

These unique looking bacteria are called anammox bugs and they thrive on waste water - particularly the type that flushes down your toilet.

"They don't have x-ray vision or super strength, it's their big appetites that makes them so remarkable," says Michelle Cull from Queensland Urban Utilities.

They eat their way through sewage, getting rid of nitrogen and ammonium, and cleaning it naturally in the process. They are purposefully grown on small plastic discs called carriers which are then moved into sewage tanks.

The more traditional process of cleaning wastewater used large amounts of chemicals and energy but now the bacteria are providing a more sustainable and efficient way forward.

"The anammox bugs will save us around half a million (Australian) dollars a year in operating cost but it will also benefit the environment because there are a cleaner, greener way to treat sewage," says Cull.

The Brisbane grown bacteria were introduced by Queensland Urban Utilities to cater to the rapidly growing population.

They also use 60 per cent less energy than the last process but there is one thing to bear in mind.

The bacteria can't be imported due to biosecurity laws, so Urban Utilities has had to grow them from scratch in temperature controlled tanks.

It's the first and only anammox farm in Australia but Urban Utilities says there will soon be enough to share with the rest of the country.

Click on the video above to see the superbug in action.

Are Bangladesh’s floating gardens the future of farming?

What do veganism and conspiracy theories have in common?

Could Singapore’s ‘robo-plants’ be the future of tech and agriculture?