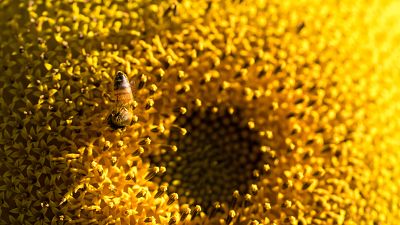 Honeybees are being trained to ‘sniff out’ sunflowers in a bid to stimulate crop production.

Scientists at the Universidad de Buenos Aires, Argentina discovered that bees could be conditioned like sniffer dogs to pick up scents. The team now hopes that this will help make bees more efficient during the pollination process.

A honeybee colony was given food which had been layered with a synthetic odour mimicking the smell of sunflowers. These bees were then found to have visited sunflowers more frequently, leading to a notable increase in crop production.

The findings could be good news for other crops which rely on pollination too, as the method could work for plants like apples or almonds, say scientists.

"We show that it's possible to condition honeybees to a rewarded odour inside the colony, and this experience modifies the bees' odour-guided behaviours later," says Walter Farina, who led the research.

"The most surprising and relevant result is that the foraging preferences for the target crop are so prolonged and intensive that it promoted significant increases in the crop yields."

This isn’t the first time Farina and his team have made a significant discovery about bees. Previously the researchers found that honeybees are able to establish long-term, stable memories related to food scents they had encountered in the nest. These memories then influenced the bees’ choices about which crops they would visit in future.

Farina was able to use this understanding of in-hive memories to develop the new research on foraging preferences. The scientists were able to manipulate the bees’ memories through the artificial sunflower odour, leading them to actively choose to visit sunflowers more.

The honeybees in the study also brought more sunflower pollen back to their hive.

"Through this procedure, it is possible to bias honeybee foraging activity and increase yields significantly," Farina says. "In other words, pollination services might be improved in pollinator-dependent crops by using simple mimic odours as part of a precision pollination strategy."

The sunflowers used in the research were found to have increased their seed production from 29 to 57 per cent.

Farina and his team are now looking at how to apply these findings to other crops which depend on pollination. By using odour mimics, the researchers hope to improve the overall efficiency of pollination, as climate change continues to threaten pollinating insects like honeybees.