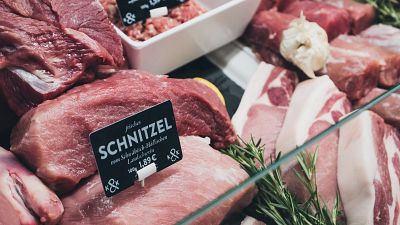 The amount of meat eaten in Europe needs to drop 81 per cent by 2050 if we are to reach emissions targets for farming, according to a new analysis by Greenpeace.

Using figures from the Food and Agriculture Organisation, the NGO found that Europeans eat around twice as much meat as the global average and roughly three times as much dairy. The Spanish came out on top as the biggest meat buyers with an average of over 100kg per person per year.

The country eating the least meat was Bulgaria at 58kg, but this comparatively low figure was still higher than the Greenpeace recommendation. Calculations call for an initial cutback to 24kg by 2030 and then 16kg by 2050, an amount that works out as roughly three portions the size of a deck of cards every week.

Figures used in the report are based on guidance from scientists about reductions in animal agriculture needed to ensure food security and keep global heating below the IPCC’s 1.5°C target. As part of the recommendation, the NGO is asking the European Commission to act on its own recognition that the overproduction and overconsumption of meat and dairy is a problem.

“Industrialisation of farming has moved us away from diverse small-scale farming to mass production, particularly of meat and dairy, as cheaply as possible and the EU’s Common Agriculture Policy has driven this,” says Greenpeace EU Agriculture and Forest Campaigner, Sini Eräjää. She claims that this artificially low price makes it easy for overconsumption to occur and fuel farming practices that devastate biodiversity, increase greenhouse gas emissions and pollute our air and water.

An article quoted by the organisation and signed by 3,600 scientists condemns the EU for not acting on this overconsumption despite acknowledging it in its own Farm to Fork report. It recommends that payments which encourage intensive animal farming are reconsidered and highlights that our reliance on animal products is part of the problem.