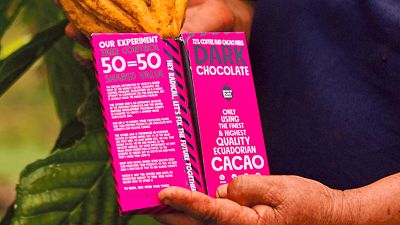 The United Nations Development Programme and the Fairchain Foundation have come together to launch a product they hope will change farming in South America for the better.

The product they’ve chosen is a chocolate bar. Not just any chocolate bar either. They say theirs is 'radical'.

Dubbed The Other Bar, it’s available in milk and dark chocolate varieties.

What sets it apart from other chocolate bars readily available in supermarkets is that farmers producing the cocoa for these bars are guaranteed a fair price that meets their real income needs, according to leaders of the project. They will also be aiming to pay farmers faster than their mass-market counterparts.

The UNDP and Fairchain Foundation have set that ‘fair’ figure at 6-7 per cent of the value of the cocoa used in making the chocolate.

By contrast, the average cocoa farmer received just 3 per cent of the value of the cocoa they produced for Western chocolate manufacturers, according to a report produced by the UNDP and Fairchain Foundation.

What's so radical about that?

“This experiment is a blueprint on how to tackle poverty,” said Carlo Ruiz, the head of UNDP Inclusive Economic Development Unit in Ecuador. “It’s a game changer because we can prove to multinationals and governments that there is consumer demand for a fairer way.”

Ten Ecuadorian farmers took part in the pilot run, which has produced 20,000 bars. The number of farmers benefiting from the scheme is set to extend to 163 by the end of the trial run.

Each pack also features a QR code on the inside, which customers can use to either get 25p off their next purchase or put towards the purchase of a new cocoa-producing tree for a farmer. One scan contributing towards a new cocoa tree will cover a quarter of the cost, meaning four purchases would cover a whole tree allowing a farmer to grow more and increase his income accordingly.

The makers of The Other Bar call the concept ‘radical equality’.

“Most consumers understand that there is a problem with the way business is conducted between multinationals and producers,” added Guido van Staveren, founder of the FairChain Foundation, who conceived the idea and developed the technology behind The Other Bar tokens.

“The little guy gets poor, while the big guy gets rich. The Other Bar proves that a combination of technology and consumer choice can tackle poverty.

“Global brands spend more than £500 billion a year on marketing. We only need £140 billion to end global poverty. So how cool would it be if manufacturers invested some of their marketing cash on positive impact? We believe this is what consumers want.”

Packs of two 50g bars are available from theother.bar at £2.76 each.

Watch: Models get a taste for the sweet at Paris Chocolate Fair