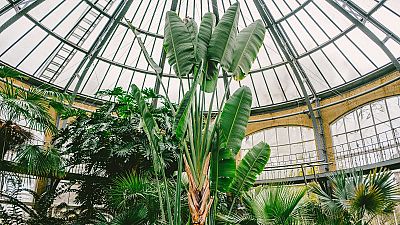 It may still be cold outside but inside Europe's many greenhouses and winter gardens you can find respite - and a tropical world of exotic plants.

Here are our top picks of Europe's best greenhouses.

Inside the most sustainable hotel in the Netherlands, you can find a temperate temple that's never cold - even in the depths of March. This subtropical indoor garden is home to ginger, turmeric and even bananas which are harvested and used by the cafes and restaurant in the Hotel Jakarta.

The huge sweeping atrium of this brand new hotel designed by SeARCH Architects is stuffed with plants and flowers, with each zone named after a part of the island of Java.

Of course, the Dutch colonised Java and the hotel's location in Amsterdam's docks is where the ships of the Dutch East India Company used to depart for Jakarta, or Batavia as it was then.

The tropical plants and temperatures are enough to make you think you've already arrived in Indonesia. And the structure is made of wood, in a nod to sustainability and as a homage to the trees that live inside this off the wall hotel that has Amsterdam buzzing.

A perfect place for plants to thrive in Paris, the city's famous Jardin des Plantes jardindesplantesdeparis.fr will have horticulture fans in heaven. This sprawling complex mixes fine architecture with incredible plantlife and the spectacular greenhouses on the site in the 5th District on the Rive Gauche are the piece de resistance.

The handsome Nouvelle Calédonie Hothouse built by Charles Rohault de Fleury in 1836 is a particular highlight - a striking early example of a glass greenhouse built a time when the technology that enabled this kind of structure was radical and revolutionary. And the plants inside were meant to showcase the exotic bounty that could be found all over the far flung corners of the French empire.

Berlin's Botanischer Garten has its own S Bahn stop in the south-west of the German capital, such is its importance to the city. The greenhouses within the site, which is now run by Berlin's prestigious Free University, are some of the world's biggest and grandest. These iron and glass structures have (obviously) seen a lot over their 100+ year history, and it's remarkable really that they still stand today as a testament to man's love of plants.

Fully restored, the 60 meters long, 23 metre high main greenhouses are spectacular structures. It might be freezing in Berlin, but inside it's warm and muggy - perfect for begonias, orchids and tropical ferns to flourish. There are giant water lilies and even a South African desert ecosystem; plants from Australia, New Zealand and the Canaries and even ones that lunch on insects.

Trauttmansdorff Castle is hundreds of years old but the famous gardens, some of Italy's grandest and best, were laid out from 1850. Count Trauttmansdorff and his family lived in the Tyrol of the Austrian empire back then, but border changes have seen this piece of history transfer to Italian soil today.

The Alps rise spectacularly over the small town of Merano and the sloping gardens are world famous. Beautifully cared for and tended, they are in peak condition. At the centre lies a spectacular greenhouse where dozens of varieties of plants grow. The design of the glasshouse is modern - and some of the permanent residents are rather exotic: stick insects, African bullfrogs, Egyptian desert locusts, giant spiders and stick insects.

The International Garden Exhibition (IGA) always gifts cities interesting gardens and architecture and it's always worth checking out the sites of former exhibitions that remain in cities, for example in Berlin from its fair in 2017. The Hamburg IGA of 1963 produced a very nice legacy for the city - tropical hothouses. In German these are the wonderfully named Tropengewächshaus and are filled with exotic plants.

They even have animal species to make it all the more authentic, including a family of turtles. These greenhouses are featured in the new book about greenhouses around the world by Magnus Edmondson and India Hobson of Haarkon called Glasshouse Greenhouse: Haarkon’s world tour of amazing botanical spaces (Pavilion Books, 2018).