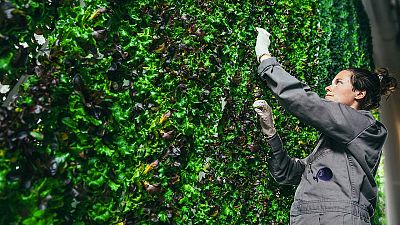 With the world’s population set to reach 9.7 billion by 2050, the World Bank is calling for innovations that will help us feed the planet. One of the options being discussed is vertical, indoor farming.

The concept involves growing food indoors in big warehouses, with walls stacked several metres high with lush plants, all grown under LED lighting and completely protected from the outside world. These indoor farms are intended to be located in cities so they are close to customers.

Supporters of the concept say it is unique as it can provide totally pesticide-free fruit and vegetables that are tastier than other varieties. The additional taste apparently comes from the ability to deliver specific growing conditions for difficult varieties, which are impossible to guarantee in traditional farms.

Another advantage to vertically-grown food is its extended shelf life.

Matt Barnard, CEO of Plenty, one of the leading US companies in the industry, explained this advantage to Euronews at the **Web Summit **held in Lisbon at the beginning of November.

“The sun forces us to grow in places that are economic and those are very limited around the world. That means we have to put these lettuce heads and strawberries and tomatoes on trucks and planes… it imposes miles and weeks, and fruits and vegetables that don’t have much flavour or nutritional value,” he said.

As Plenty grows its food directly in the cities it supplies, it cuts waiting and travel time, which it says extends the shelf life by weeks and gives the food additional nutrition.

He said it does so by cutting costs by supplying customers directly, which simplifies the traditional supply chain.

One of the most obvious and important criticisms of indoor farming is how energy intensive its lighting system is. Critics say our focus should be on how to use the free, non-polluting energy of the sun in more innovative ways, such as by better utilising city space. This could mean growing food in greenhouses on the roofs of city buildings, for example.

When asked about the issue of energy, Plenty wouldn’t reveal its research that compared the energy consumption of its farms vs. regular farms.

Plenty CEO Barnard argued that to a certain extent, energy comparisons are redundant because indoor farming is going to become a necessary addition to regular farming if we want to feed the planet in the future.

“Without it, we are not going meet the demand and needs for nutrient-rich food around the world,” he claimed.

He also suggested that some of the environmental impact of the farms is offset by the lower transport distances to consumers’ homes, and by the fact that their farms apparently use less than 1% of the water and 1% of the land to produce the same crops as traditional farms.

However, as of yet, there doesn’t appear to be any clear, neutral research that compares the total environmental impact of the whole supply chain of vertical and traditional farming, which makes it difficult to understand the feasibility of indoor farms as a widespread solution.