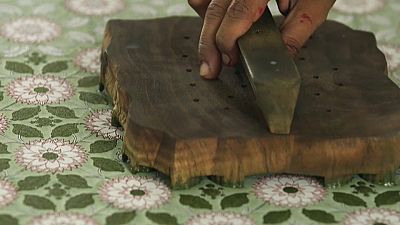 A traditional textiles factory in Rajasthan India is bringing the ancient art of block printing back to life - and a French-Indian woman is leading the charge.

Brigitte Singh says she believes that this red poppy pattern was probably first created for Emperor Shah Jahan, the builder of the Taj Mahal, four centuries ago.

However, recreating these fabrics, that once clothed the sophisticated Mughal emperors in the 16th and 17th century, takes skill.

Skill that has dwindled to the point that, Western India’s Jaipur is considered as the "last bastion" of the technique of using carved blocks of wood to print patterns on material.

In 1980, Brigitte moved to Jaipur, by chance, at the tender age of 25 after studying the decorative arts in Paris.

"So by default, I ended up in Jaipur," she said.

Once there and after little luck with miniature painting, she stumbled on a craftsman using the traditional block printing technique in local workshops -- and never looked back ever since!

She started with just a few scarves and then the dream took off two years later during a trip to London. She presented her works to some friends who were well versed in Indian textiles. They persuaded her to showcase her creations to Colefax and Fowler, a well-known British Interior decoration firm, who commissioned her for printed textiles.

Over the next forty years, she build her own studio and worked with a “family of printers” recreating the Mughal-era poppy cloth.

Brigitte Singh has a clear creative process. She begins by handing over precise paintings to her sculptor, Rajesh Kumar, who will then sculpt the designs on blocks of wood. He will sculpt the identical design on multiple blocks, which will be used with the different colour dyes.

She praises his skill saying, “he is a remarkable sculptor, with a very serious eye.”

Once the blocks are ready, the artisans will dip them into the dye and delicately place them on the fabric, press down then tap.

But the work is slow and intricate, her team, comprising of 6 people, produce no more than 40 metres of material every day.

To date, her wares have been a huge hit with Indian, British and Japanese buyers. In 2014, she made a Mughal poppy print quilted coat, called an Atamsukh - meaning "comfort of the soul" - that was later acquired by the Victoria and Albert Museum in London.

Another piece of her work is in the collection of the Metropolitan Art Museum in New York.

Her passion and dedication to keep this age old craft alive have won her the admiration of both the French and Rajasthan governments, culminating in the Ordre National du Merite in 2015 and the Prashasti Patra award in 2011. But for Singh, it isn’t a question of sales, products or accolades, it’s about preserving the tradition.

"The important thing is to keep the know-how alive," she said.

"More precious than the product, the real treasure is the savoir faire."

Meet the Spanish artisan whose handwoven crafts made him an influencer