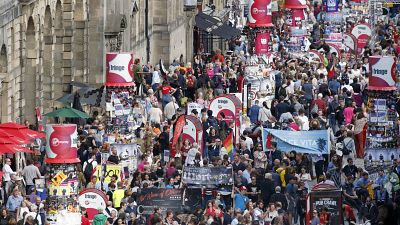 The Edinburgh Fringe is in full swing, purporting to fill the month of August with the best new acts in theatre, comedy and art.

Many are glad to see the return of the festival after two fallow years when the Covid-19 pandemic caused a cancellation and a reduced programme. But has the festival returned with its original purpose intact?

The Fringe's comeback has not been without its controversies. Most recently, the Pleasance Theatre’s cancellation of Jerry Sadowtiz’s show after one performance drew ire as people questioned the festival’s willingness to embrace free speech.

While the debate as to whether Sadowitz’s show should or should not have been cancelled will likely rage on in op-eds across Britain, there remains a growing problem for the Fringe: it is no longer a place to elevate and grow as an early-career comedian.

By its own definition and name as a ‘fringe’ festival, comedy critics argue it has long favoured established acts in an effort to make more money.

As a ‘fringe’ festival, is Edinburgh still fit for purpose?

Priced out of the Fringe

The first and most crucial problem for young acts is the price tag that comes with the festival.

Before you’ve even started, you’re likely to have paid over €400 to the Fringe design team.

In previous years, this would place your show in the Fringe’s programme as well as its app. While the Fringe brochure lists every act alphabetically, the Fringe app is a godsend for new acts.

By checking the Fringe app, a potential audience member could be leaving a show and find your little-known act was right round the corner. In advertising terms for the smaller shows, it's worth its weight in gold.

But this year, the Edinburgh Festival Fringe Society scrapped the app.

The plan to go back to a paper brochure was decided back in December last year, despite not letting Fringe participants know until July.

“It is absolutely vital during the Fringe, especially selling tickets on the day or closer to the time of the shows,” wrote the Live Comedy Association in an open letter to the Fringe Society. "It is shocking that there is no reduction in registration fee either, and that the way performers found out such a huge change to this year’s Fringe was a response to a tweet asking where the app was."

Shona McCarthy, CEO of the Edinburgh Festival Fringe Society did respond with an apology and explained that the costs required to build the app for 2022 weren’t feasible.

But this did little to assuage people’s dismay.

The lack of the fringe app was a big shame and the @edfringe website is just not user friendly. I found buying tickets and working out what was on when very fiddly and it also crashed twice when I was buying tickets and charged me anyway. I think it needs a radical redesign. 2/4

Having a lovely time at the Fringe. And although the lack of an app has made it a bit more difficult to navigate, at least the website is an absolute pile of wank.

But the registration fees are just the beginning in a long line of costs.

Many theatres that performers work with require fees to be featured in their brochure. Theatres will often also take from 60 to 70 per cent of any money made from tickets.

And there are all the fees involved if you want posters designed and flyers printed, let alone the costs for working with other creatives to put your show on.

Which all comes before often the biggest expense of them all. Accommodation.

“What is being done to help prevent the vastly inflated cost of accommodation during the Fringe? It is now at tipping point. Acts are deciding they can’t afford to go this year. Acts, press, agents, and producers are losing money and this is the main cause,” wrote the Live Comedy Association.

This year’s Fringe is back to its enormous previous proportions. There are 3,500 performances across 300 venues. At 2019’s Fringe, there were 430,000 attendees. With thousands coming to the Scottish city for the month, there’s always going to be a scarcity of accommodation.

“The real killer this year is accommodation,” Kate Copstick, a comedian and critic who has reviewed at the Fringe every year since 1999.

“A lot of people are living in a tent on a campsite,” she says. Copstick also mentions that some comics unable to afford to stay in Edinburgh have opted for places like Dunfermline in Fife, over an hour away.

Cobbling together the money to get to the Fringe is half the battle. Comedians then have to find an audience.

The core ethos of a fringe festival is to promote lesser-known names. When giving tips for our Fringe preview, the comedian Chris Davis recommended seeking out unknown acts.

“There will be the odd famous comedian that you'll want to see, but for the most part, talk to people, scan the QR code of an interesting poster you see, or simply walk into a pub that seems fitting for you and more than likely there will be a great comedy show,” Davis says.

But for Copstick, the Fringe Society’s focus on famous comedians has taken away the possibility for lesser-known comics to shine.

For her, the problem started in the 90s when the Fringe started to develop bigger capacity venues.

“The whole direction of the support is in terms of more commercial venues,” she says. "As more big name comedians on the UK scene come to the Fringe to do short runs of their works in progress, more punters are arriving expecting to see those same names and none of the smaller acts."

Instead of supporting newer artists, the Fringe has invested into making a larger, more glamorous festival event atmosphere with new areas focusing on food vans.

Copstick believes this focus has changed the priorities of attendees.

“They come to see whatever big name or a couple of big names they’ve heard of. Then spend £7 for a pint of cooking lager and buy what is basically a burger that's been given a fancy name and some extra lettuce,” she says.

“The Fringe Society was created to serve, assist and help and it now seems to have become an end in itself,” Richard Beck, a theatre critic and editor-in-chief of Broadway Baby says.

“Now, the Fringe Society exists to stay in business. From the accommodation situation, which has been allowed to go rampantly in search of profits to cover the costs that they lost in the last few years during the pandemic, to the way venues have been handled - that's a complete role reversal.”

Giraffes in a Catalan theatre surprise people in Lithuania

Going to Edinburgh Fringe? Here's some advice from veteran performers