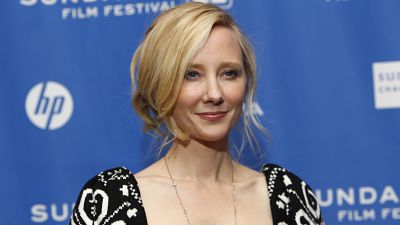 died from inhalation injury and burns after her fiery car crash and the death was ruled an accident, according to coroner's results released on Wednesday.

A full autopsy report was still being completed, the coroner's office said.

The actor was removed from life support Sunday at a burn center and was declared brain-dead but was kept on life support until her organs could be donated.

The coroner’s office listed 11 August as her date of death.

The Los Angeles Police Department has ended its investigation into Anne Heche’s car accident, when the actor crashed into a Los Angeles home on Aug 5.

The 53-year-old star of films like Donnie Brasco, the political satire Wag the Dog and the 1998 remake of Psycho is “brain dead”, which under California law is the definition of death. She is on life support, pending evaluation for organ donation.

“As of today, there will be no further investigative efforts made in this case,” the department announced on Friday. “Any information or records that have been requested prior to this turn of events will still be collected as they arrive as a matter of formalities and included in the overall case. When a person suspected of a crime expires, we do not present for filing consideration.”

Detectives looking into the crash had said narcotics were found in a blood sample taken from Heche. She has been hospitalized at a Los Angeles burn center.

"Today we lost a bright light, a kind and most joyful soul, a loving mother, and a loyal friend," Heche's family said in a joint statement on Friday.

"Anne will be deeply missed but she lives on through her beautiful sons, her iconic body of work, and her passionate advocacy," the statement added. "Her bravery for always standing in her truth, spreading her message of love and acceptance, will continue to have a lasting impact."

Heche first came to prominence on the soap opera Another World from 1987 to 1991, where she played twins Vicky and Marley Hudson. She won a Daytime Emmy Award for the role.

She also starred opposite Harrison Ford in Six Days, Seven Nights and, more recently, was a contestant on Dancing with the Stars in 2020.

Between 1997 and 2000, Heche was also in a relationship with talk show host Ellen DeGeneres.

"This is a sad day," DeGeneres posted on Twitter. "I'm sending Anne's children, family and friends all of my love."

Several of Heche’s acting projects are expected to be released posthumously.

These include Girl in Room 13, expected to be released on Lifetime in September 2022, What Remains, scheduled to be released in 2023, and HBO Max TV series The Idol, created by Abel Tesfaye (The Weeknd) and Euphoria creator Sam Levinson.

What don't you know about Olivia Newton-John's career?