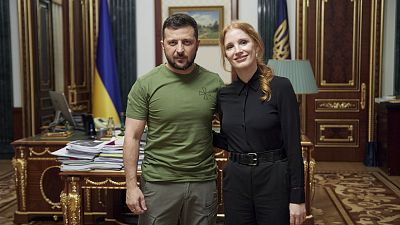 American actress and film producer Jessica Chastain is the latest in a long line of celebrities who have visited Ukraine and met President Volodymyr Zelenskyy.

Who are the other stars and are they making a difference? And can these meetings be dismissed as glorified photo-ops or are they part of a wider strategy?

The Eyes of Jessica Chastain

Chastain, who won the Best Actress Oscar this year for her performance in The Eyes of Tammy Faye, arrived in Kyiv last Sunday and visited the Okhmatdyt Children's Hospital, where she was told about the work of the medical center during the martial law. She later met with President Zelenskyy and head of the presidential administration Andriy Yermak, a meeting during which she described Ukrainians as “incredibly brave and very strong.”

Zelenskyy posted pictures of the meeting on his Telegram account, with the note: “For us, such visits of famous people are extremely valuable. Thanks to this, the world will hear, know, and understand the truth about what is happening in our country even more. Thanks for the support!"

In his daily address to the people, the President said: “Ukraine will do everything to make our struggle and Ukrainian needs in all countries of the world and in all audiences – even those who usually do not follow political life.”

He went on to single out Jessica Chastain, saying that the actress “saw with her own eyes the consequences of the Russian occupation in Irpin, Kyiv region.”

“Her story about our war will definitely be heard. We are preparing an important humanitarian event,” Zelenskyy added. “I am grateful to all friends of Ukraine abroad and to everyone who helps expand our ties in the world.”

Chastain is far from the first celeb to visit the war-torn capital.

“Nobody chooses to flee their home,” said the actor in a video posted by UNHCR. “Seeking safety is a right and it needs to be upheld for every person.”

Following his visit, Ukraine’s department of defense thanked Stiller, as well as stars like Angelina Jolie, Liev Schreiber and Sean Penn, who “despite the danger, have visited us.”

Liev Schreiber, the star of Ray Donovan and X-Men Origins: Wolverine, who has Ukrainian roots, met Ukrainians in bomb shelters and co-founded BlueCheck Ukraine, an initiative to vet nongovernmental organizations.

He spoke at the recent 56th edition of the Karlovy Vary Film Festival about his new organization, which was created in response to Americans and Westerners’ skeptical attitude regarding donations and whether funds would reach those in need.

“So rather than giving your money to large international charities, try to find the way to go inside and help the people who are helping themselves,” said Schreiber. “That was the idea behind BlueCheck Ukraine.”

His presence at Karlovy Vary coincided with the attendance of a sizeable Ukrainian delegation, who were raising awareness for the country’s film industry and its attempts to keep working against the backdrop of the war. The festival, in a sign of solidarity with the Odesa International Film Festival, which was cancelled this year, helped its Ukrainian colleagues by organizing Stand With Ukraine information panels and by devoting a section of its programme to special screenings called Work in Progress, which showcased eight unfinished Ukrainian films.

In an Instagram post, the couple wrote that all raised funds would be donated to Flexport.org and Airbnb.org, organizations that help Ukrainians fleeing their war-torn country.

“While this far from a solution for the problem, our collective effort will provide a softer landing for so many people as they forge ahead into their future of uncertainty,” they stated.

On his side, Sherlock and Doctor Strange actor Benedict Cumberbatch stated in April that he hoped to participate in a British government scheme called Homes for Ukraine, through which citizens can offer accommodation for refugees. To put his money where his mouth is, the actor also revealed that he was hosting a refugee family in his home.

The possibility of backlash

The fact that stars are visiting, speaking out and, in some cases, raising funds to support the unfolding humanitarian crisis can only be applauded.

However, many can feel uncomfortable when celebs try to become humanitarians.

For instance, Sean Penn, who has built a reputation over the years for involving himself in international affairs, has frequently experienced backlash for talking openly about his activism and casting himself as a “journalist” when best suits him.

The Oscar-winning American actor was one of the first to travel to Kyiv in February, in order to record the events happening in Ukraine, according to a statement from the office of the President. He also visited Zelenskyy and attended a press briefing with both the head of state and the vice prime minister. He had previously visited Ukraine in November 2021 for his planned documentary on the country.

Frustratingly, his efforts often run the risk of being interpreted as overly earnest and self-indulgent, traits that were satirized in the comedy Team America: World Police. When Penn vowed to “smelt” his Oscars in public if Zelenskyy wasn’t invited on the Oscars ceremony last March, the passion had turned into performative hectoring.

It’s a tightrope that must be treaded carefully: while celebrities can raise awareness for causes, any backlash in the public eye could potentially undermine charitable actions or dent what seems like ardent dedication.

But it’s a calculated risk.

There is plenty of cynicism regarding the involvement of Hollywood A-listers, as stars frequently jump on topical bandwagons and tragedies as an exercise in self-promotion, or to break the impression that they are part of an out-of-touch elite.

But the flow goes both ways, as President Zelenskyy has not been camera shy or shunned the spotlight.

In recent months, he has taken part in several glitzy events including the opening ceremony of the 75th Cannes Film Festival and the 64th Annual Grammy Awards. He offered a speech via big screen that began with the line “The war. What’s more opposite than music?”

He went on to implore those who were listening to “tell the truth about the war on your social networks, on TV. Support us in any way you can. Any… But not silence.”

Zelenskyy has been outspoken in gathering international support for his country on several platforms that couldn’t seem more far removed from the ongoing tragedy.

And while some media appearances can initially appear jarring – the swish photoshoot contrasting with the horrors of an ongoing war – his interventions are part of a wider, well thought-out strategy to raise awareness by any means possible for the Ukrainian cause. Even if that means leveraging the clout and public platform of celebrities.

For him, appearing on screen around the world, photographed with A-listers and sharing Instagram stories of their visits is a way of reaching out to millions and making sure that the war in Ukraine is in the headlines.

No meeting is just a meeting; as cold as it may sound, it’s a shrewd outreach strategy, one which reveals the former comedian-turned-president as someone who understands celebrity culture and the media, how the wider public interacts with global events, and how celebrity status can be utilized in order to yield concrete results.

‘Cinema must not be silent’: Zelenskyy addresses Cannes Film Festival