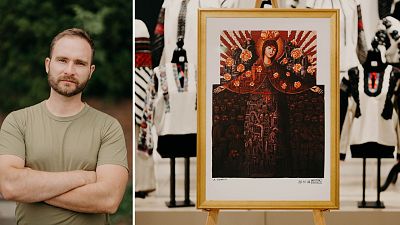 The auction was held from 28 July to 3 August, in partnership with the Ukrainian World Congress’ Unite With Ukraine campaign and the Ukrainian government’s United24 “Army of Drones” scheme.

On sale were 75 numbered and signed prints of an artwork entitled, 'Our Lady of Mariupol', created by Ukrainian book illustrator and conceptual artist Maksym Palenko.

While 74 of the prints were listed for $1,500, it was announced at the end of the auction that a one-of-a-kind limited-edition copy was auctioned off for an unexpected $22,000.

What does 'Our Lady of Mariupol' depict?

The visually striking artwork depicts the figure of Lady of Mariupol extending her arms to cover the defenders of the Azovstal plant from shelling and destruction.

Her cassock shows the inner structure of the Azovstal catacombs that became a temporary shelter for Ukrainian fighters and civilians.

Mariupol, city in the Pryazovia region of Ukraine, was besieged by Russian forces and largely destroyed. On 16 May 2022, the last remaining Ukrainian troops in Azovstal Steel Plant surrendered as Russia secured complete control over the city.

"Our Lady of Mariupol is not just a work of art, but a symbol of hope and resistance," says Christian Borys, the founder of Saint Javelin. "With every sale we make, we are getting ever closer to allowing the people of Ukraine to retake the skies and challenge Russian oppression with the only thing it understands - force."

How has Saint Javelin raised over $1.2 million for Ukraine?

It quickly became a powerful symbol of Ukrainian resistance and encouraged Borys to start printing the image on t-shirts and stickers in order to help raise funds for the country.

"I started this thing to make some sort of small impact. I never had any idea that it would become what it has," he told Euronews Culture.

"Honestly, I thought I'd sell around 100 of the stickers to my friends and raise around $500. But it just took off like crazy right from the beginning."

As of the beginning of August, the Saint Javelin enterprise has raised more than $1.2 million (approx. €1.1 million) for Ukraine.

"Our mantra is: We’re in business to rebuild Ukraine. So, by making t-shirts, stickers, hats, all that kind of stuff, we can bring the maximum economic benefit back to Ukraine by making those things in Ukraine, and then using our profits to actually support different organisations across Ukraine," says Borys.

He and his organisation do not plan to stop fundraising any time soon.

“We want to become a 'Made in Ukraine' brand which appeals to a western audience. We want to stick around and keep it going, because the rebuilding process is going to take decades."

Outrage in Kyiv after Amnesty accuses it of endangering civilian life

No Nut November is over: What is it and are there benefits?