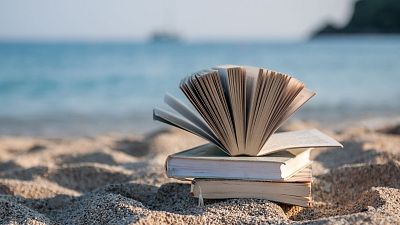 The LGBTQ+ community has flourished on the screen and page this year.

In a recent study, at least 11.9 percent of characters on primetime broadcasting in the US were LGBTQ+, an increase of 2.8 percent from the previous year.

But that jump doesn’t even compare to the increase in LGBTQ+ literature.

In 2021, around 5 million LGBTQ+ novels were sold in the US, doubling the previous year’s sales, according to NPD BookScan.

To mark this landmark achievement, here is a list of book recommendations from the last five years that centre on the LGBTQ+ community, and that would make ideal summer reading.

A Lady for a Duke

'A Lady for a Duke' by Alexis Hall is about a trans woman who faked her death while fighting Napoleon in Waterloo.

After she returns to England, she meets her long-lost friend, who doesn’t recognize her.

They, of course, fall in love, and have to decide if it's worth fighting society to be together.

That is why this book is a great beach read. It will restore some of your faith in humanity, at least for the 480 pages until you get to the end.

'Winter’s Orbit' by Everina Maxwell is a space opera, meets murder mystery novel, with an arranged marriage thrown into the mix.

It has a unique origin story, starting life as a self-published original story on Archive of our Own (A03), a fanfiction website.

And maybe because of that, this book feels like it was written for the author's friends, in the best possible way.

Much of the worldbuilding is beautifully utopian. Most impressively, gender isn’t expressed by modern signifiers, such as hair or clothes. It is instead shown through a person’s hairpiece, pin, or jewellery.

'Peter Darling' by Austin Chant is a queer, trans retelling of Peter Pan.

In this story, Peter is transmasculine, and he used to be known as Wendy in England. But in Neverland, everyone knows him by Peter Pan.

When he returns to the island, the only person who missed him is his old enemy Captain Hook.

The pair, both adults at this point, fall in love while they discover that maybe Neverland is not as safe as they originally thought.

This book is also perfect for a weekend away because it’s a quick read, coming in at just over 51,000 words.

The Origins of Iris

'The Origins of Iris' by Beth Lewis is the closest thing to a horror novel on this list. The story is about a woman running away from her abusive wife.

While hiding out in an abandoned cabin in the woods, she meets herself, or a version of herself, that made all the ‘right’ choices. Choices the main character wishes she had made.

This novel deals with the theme of regret and what-ifs.

For example, what if the main character hadn’t dumped her original girlfriend? What if she had a different relationship with her dad?

And what if she would be equally unhappy if she made different choices?

'The Deep' by Rivers Solomon, with Daveed Diggs, William Hutson and Jonathan Snipes, imagines a world where the children of African women who were thrown overboard during the pan-Atlantic slave trade survived.

And their descendants, now living in an underwater society, are known as the Wajinru.

Most of the community prospers while ‘forgetting’ their traumas, though one person holds all of their negative memories.

The story is from that person’s point of view as she deals with the burdens of generational trauma without the sense of community that helps alleviate it. She will eventually find beauty and community inside that history.

It is a beautiful novella that’s truly unique.