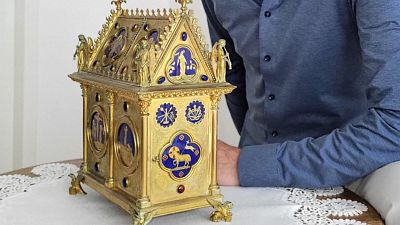 Dutch art sleuth Arthur Brand has recovered one of the most sacred relics in the Catholic church.   -   Copyright  Arthur Brand / twitter
By Charlotte Elton  •  Updated: 12/07/2022

A curse-fearing thief has returned one of the most sacred artefacts of the Catholic Church.

The Precious Blood of Christ relic  - an ornate golden shrine said to contain two vials of Jesus’s blood - was stolen from Fécamp Abbey Church on 1 June, 2022.

But just three weeks later, it was dropped on art sleuth Arthur Brand’s doorstep - over 490 kilometres away -  in the middle of the night.

Mr Brand - known as the ‘Dutch Indiana Jones’ for his track record of recovering stolen art - said that the thieves contacted him anonymously.

"This person was approaching me on behalf of another, at whose home the stolen relics were being stored," says Brand.

“But to have the ultimate relic, the blood of Jesus in your home, stolen, that's a curse. When they realised what it was, that you in fact cannot sell it, they knew they had to get rid of it.”

Why did thieves return the Precious Blood of Christ relic?

Mr Brand’s newest discovery is like something out of the Da Vinci Code - appropriate, given that the Dutchman is a self-described “huge Dan Brown fan.”

For 1,000 years, the reliquary had been kept in the abbey church of Fécamp, in northern France. For a millennium, believers have embarked on pilgrimages to the sacred object, believed to contain drops of Jesus’ blood collected during his crucifixion.

It was stolen on 1 June, just two weeks before the annual ‘Mass of the Sacred Blood’ celebration.

Alongside other liturgical relics, the priceless object was returned in an unceremonious cardboard box.

“As a Catholic, this is about as close to Jesus and the Holy Grail legend as you can get," Brand says.

"It was a religious experience," he adds.

Mr Brand will now hand the objects to Dutch police, who will return them to the Abbey.

The intrepid investigator has recovered over 200 works of art, including a Picasso, Oscar Wilde’s ring, and a 1600-year-old missing mosaic.

He also tracked down Hitler’s Horse statues - life-size bronze sculptors rumoured to have been destroyed by the Russians. He estimates that the value of the cases he has solved exceeds more than 150 million euros.

A creative concept deliciously unites some of Europe's finest vines