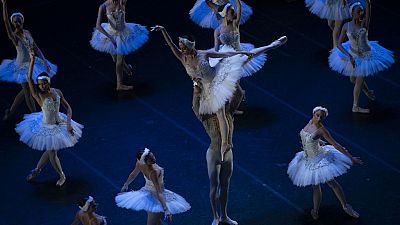 Ballet dancers perform during the rehearsal of 'Swan Lake' at the Municipal Theatre of Rio de Janeiro in Rio de Janeiro, Brazil, on May 12, 2022.   -   Copyright  MAURO PIMENTEL/AFP or licensors
By Joshua Askew  •  Updated: 30/06/2022

But they weren't the only targets.

In several countries, events, exhibitions and performances featuring Russian artists and cultural figures have been restricted and cancelled, although there is no unified movement to 'cancel' Russian culture.

In Italy, a course about the work of Russian author Fyodor Dostoevsky was cancelled and then reinstated, following a social media backlash.

In the Netherlands, the Amsterdam Heritage museum cut ties with its partner, the State Hermitage Museum of Saint Petersburg, forcing it to close its exhibition 'Russian Avant-Garde: Revolution in the Arts'.

In Wales, the Cardiff Philharmonic Orchestra (CPO) removed Russian composer Tchaikovsky from its upcoming programme, calling it “inappropriate" to play the militaristic '1812 Overture' and 'Symphony No 2', which is considered offensive in Ukraine.

Meanwhile, some Russians are taking it upon themselves to remove their own work. At the Venice Biennale, artists Alexandra Sukhareva and Kirill Savchenkov pulled out of the Russian Pavilion, saying "there is no place for art when ... when citizens of Ukraine are hiding in shelters [and] when Russian protesters are getting silenced."

But is the removal of Russian art and music from our cultural agenda the right thing to do?

Euronews spoke to three experts about some of the main arguments for and against ‘cancelling’ Russia over the Ukraine war.

The arguments 'for' cancelling Russia's presence in art and culture

Sanctioning Russian culture sends an important signal to Ukraine, according to the experts.

"It makes a point of showing that we are behind Ukraine,” said Stephen Hutchings, professor of Russian Studies at The University of Manchester in England. “That we are not going to abandon them, and feel their pain.”

This is in sync with Ukraine’s own policy. The country's government recently passed a law banning Russian music and books produced after 1991, unless the author condemns the war.

According to Dr Marco Biasioli, lecturer at Sapienza University in Italy, and specialist in Russian culture, this is "understandable."

"Ukrainians are reacting to the culture of a country that has invaded them and killed their fellow citizens. In exceptional circumstances, exceptional measures are needed," he said, pointing out that German works were restricted in Britain during World War Two.

"Hostility towards a culture is dependent on political situations and it doesn't mean it will be forever."

But something complicates the picture.

Lots of what is Ukrainian culture has been mislabelled as Russian, according to Dr Uilleam Blacker, associate professor in Eastern European culture at University College London.

The artist Malevich, whose exhibition was cancelled by the Amsterdam Hermitage Museum in March, was Polish-Ukrainian Russian for example.

Dr Blacker said it was "important" to focus more on Ukrainian culture, arguing it has been “ignored for so long”.

Russia should not reap the "huge benefits' ' from hosting cultural events, argued the experts.

Over the past decades, Russia has hosted several international sports competitions, such as the 2018 World Cup and 2014 Winter Olympics.

These events are important for Russia, says Prof Hutchings, as they improve its image abroad—though the Ukraine invasion has “completely destroyed” its international reputation.

Dr Blacker seconded this: "People think politics should be kept out of sports, but they are very tied up in state activities ... The Russian state has put a lot of money into sponsoring culture to create a certain image of Russia,” he added.

Dr Blacker also claimed it was "absolutely outrageous" that Russia was allowed to continue with the 2014 Winter Olympics, after annexing Crimea just months earlier.

"They got the message that they could get away with it,” he said. “There’s a big problem with business as usual.”

Cancelling Russian culture sends a message to other countries, such as those in Asia or Africa, not to break international law, said Prof Hutchings, which can help maintain peace and the international system.

But he added there were problems surrounding how bans were interpreted overseas, especially if they were seen as western “hypocrisy” or “hatred” towards Russia.

There is widespread ambivalence towards the Ukraine war in the African continent.

The arguments 'against' cancelling Russia's presence in art and culture

While all the experts condemned Russia's war in Ukraine, they did offer some arguments against reducing the presence of Russian artists, authors and performers in our culture and education.

Some experts said that limiting access to Russian culture impacts our understanding.

"Looking beyond the war, the only hope is to restore mutual respect and intercultural dialogue," said Prof Hutchings, citing his sadness that student trips to Russia as part of his university course had been halted.

"This is a small price to pay, but in the long term we may stop engaging with Russia and stop trying to understand it," he added.

Engagement is also important to understand the war itself, according to the experts.

Putin himself is an avid reader of Russian history and literature, often citing Pushkin, whose works have been criticised as imperialist.

"If we stop reading, how on earth will we understand what is driving the policies of Russia's elite," said Prof Hutchings.

“It is only by studying Russian history and culture that we can understand where this invasion came from.”

"It feeds Putin's narrative of victimhood, which he has often used to agitate anti-Western sentiment among Russians and consolidate public support," said Dr Biasioli.

"In other words, it makes Putin stronger, not weaker."

"At the heart of these decisions is hatred for Russia - for Russians, for all its inhabitants,” he wrote on Telegram. “Hate [for] our culture. Hence the cancellation of Tolstoy, Chekhov, Tchaikovsky and Shostakovich. So it was, almost always."

However, according to Dr Blacker, there is very little evidence of Russophobia, adding that “Russian culture is hugely present in the west and will continue to be."

"People criticise Russia because it is acting violently,” he continued. “That’s not a phobia.”

All experts agreed that if Russian artists publicly support the war they should not be offered a platform to express their views.

However, there were doubts about where to draw the line.

Prof Hutchings raised concerns about a growing intolerance towards more nuanced beliefs that try to understand the Russian perspective.

"There is a danger that in responding to Putin, we end up becoming a mirror image of what he is doing,” he said.

He pointed out, however, that Russia, more than anywhere else, has done the most to cancel its own culture by “constantly persecuting, repressing and even killing those who criticise the state”.