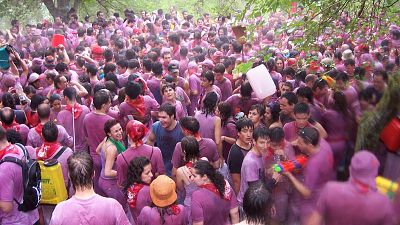 In Haro, the famous wine region of La Rioja in the north of Spain, thousands of people took to the streets to participate in La Batalla del Vino (The Wine Battle).

The spectacular festival, which takes place each year on 29 June (the day of the patron saint San Pedro), made its return after a two-year break due to the pandemic.

The celebration involves thirsty revellers dressing up in white, climbing up a mountain and throwing litres upon litres of red wine at each other from bottles, buckets and water pistols.

According to belief, the festival began from a land dispute between Haro and the neighbouring town of Miranda De Ebro hundreds of years ago.

The wine battle lasts for a few hours, after which the participants make their way back down the mountain to the Plaza de la Paz, where the celebrations continue with tapas, drinks and dancing.

According to this year's organisers around 40,000 litres of wine were used during the battle and 5,000 people participated.