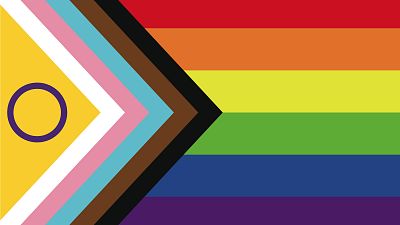 If you’ve walked around central London lately, you may have noticed a lot of new flags hanging over some of the streets.

As the endless Union Jacks were taken down after the Queen’s Jubilee, a new Pride flag adorned Regent Street, one of London’s busiest areas.

To celebrate 50 years of Pride Month, the Crown Estate commissioned 100 Pride flags to hang above Regent Street for the first time.

But the flag on show is not the typical rainbow flag you probably know.

This version is the intersex-inclusive Pride flag and was designed by Valentino Vecchiette in 2021.

Vecchiette, who is the founder of Intersex Equality Rights UK added the purple circle on yellow background to incorporate the voices of intersex people.

Intersex is a broad term for people born with sex characteristics that are not exclusively associated with a singular binary definition of male or female. These sexual characteristics can be internal, such as sexual organs or chromosomes, or they can be external signifiers, including body hair and breast growth.

But Vecchiette’s addition to the Pride Flag is only the latest chapter in a fascinating journey to create a flag to represent all the diversity within the LGBTQI+ community.

Although the rainbow base design of the Pride flag seems ubiquitous in 2022, it wasn’t until the 1970s that it was created.

Until then, one of the only symbols to represent the queer community had been the pink triangle, created by the Nazis to identify gay men.

Although it has been reclaimed and is used proudly by some members of the queer community, others wanted a new symbol, one free of the pink triangle’s dark origins.

In 1977, San Francisco artist Gilbert Baker was convinced by friends, filmmaker Artie Bressan and Harvey Milk, the first openly gay elected official in California, to create an image of pride for the gay community.

Initially, Baker was against the idea of flags, thinking they represented patriotism. But the previous year had been 1976, the 200th anniversary of the creation of the United States as an independent republic and the Star-Spangled Banner had been everywhere.

Later that week, Baker went to a show at the Winterland Ballroom. As he watched the diverse crowd dance around him, he was struck with an idea.

“Dance fused us, magical and cleansing. We were all in a swirl of colour and light. It was like a rainbow,” he said.

Baker stitched together the colours of the rainbow to create the original Pride flag. The eight original colours each had their own meaning.

Baker’s flag grew in popularity, first in the San Francisco gay scene. After Harvey Milk’s assassination in 1978, many organisations adopted the flag to commemorate his accomplishments.

But due to the growth in popularity, the flag had to chang. The demand for the flag outstripped the amount of hot pink fabric being manufactured. So a new 7-stripe version was born without the pink colour.

The flag was amended again in 1979 to make it an even number of stripes, for logistical reasons. The turquoise and indigo stripes were combined to become a single royal blue stripe.

The new six-stripe Pride flag became the most famous version and is likely the one you’ll see at most Pride events around the world.

Over the years, some people have argued for modifications to the flag, to better represent the breadth of experiences of queer people.

In 2017, the city of Philadelphia added two stripes to the six-stripe design to highlight the struggles of queer people of colour.

The new black and brown stripes were placed at the top of the flag. While some argued that the addition was divisionary, the design was soon taken up by other cities including Manchester in the UK.

As awareness grew of the different struggles marginalised groups felt within the queer community, more flags were created to signify individual groups.

In 1999, Monica Helms created the Transgender flag, made up of five light blue, pink and white stripes.

After the popularity of the Philadelphia version, designer Daniel Quasar created a version of the Pride flag that incorporated the Transgender flag colours, as well as the new brown and black colours.

With its white, pink, light blue, brown and black chevron, the new design, named the Progress Pride Flag, was created to not just represent trans people and queer people of colour, but to put them at the forefront. Quasar also wanted the black stripe to represent those affected by HIV/AIDS.

“This new design forces the viewer to reflect on their own feelings towards the original Pride flag and its meaning, as well as the differing opinions on who that flag really represents, while also bringing into clear focus the current needs within our community,” Quasar has said.

While there is still hot debate and division in the LGBTQI+ community about the original rainbow flag and its subsequent resdesigns, different versions are still regularly created.

A new version in 2017 from the flag's original designer, Baker, added a lavender stripe to represent diversity.

A different design in 2018 added a red, blue and black chevron to represent the Self-Respect Movement in India, the anti-caste movement and leftist ideology.

So the 2021 design by Vecchietti to incorporate the intersex flag's purple circle and yellow background into Qasar’s Progress Pride flag, now being flown in London, becomes the latest chapter in a nearly 45-year history of Pride flags.

Is the Edinburgh Fringe pushing out smaller acts?

What will the Armie Hammer documentary expose?