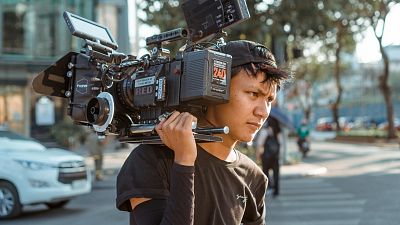 When you think of certain countries or places in the world, does a specific colour come to mind? In your head, the image of a brisk day in Helsinki might evoke a blue, while the blazing sun of Mexico City might give it a strong orange tone.

You’re likely being influenced by a cinematic habit of colour grading.

The yellow, blue and grey palettes

The Media Diversity Institute (MDI) works to report on the ways race, religion, ethnicity, class, disability, gender and sexual identities are presented in the media. They’ve researched the ways that many Western filmmakers portray foreign countries through colour grading.

“Latin America, Africa or South Asia are usually covered in yellow palettes, economically-developed countries, such as the US, are blue, while grey is reserved for Eastern Europe, suggesting gloominess, depression, unhappiness,” she explains.

There are lots of reasons why a scene will be colour graded. A colourist’s primary concern is to make sure that the film’s scenes have a colour palette that fits together. But a director may also want a certain scene to evoke an emotion through a stronger colour palette.

The importance of colour grading and the different ways a palette or amount of saturation is used can dramatically affect the way the image is interpreted.

“To leave the biggest mark on your audience, your images can’t just be accurate, they have to say something emotionally. They must be in creative harmony with the story you’re telling,” writes filmmaker Noam Kroll in his blog.

“Certain colour palettes draw the viewer in and create a sense of comfort, while others isolate the viewer and make them feel disoriented. Just as some create a nostalgic atmosphere while others evoke tension and grit,” he continues.

However, the overuse of colour-based depictions for these countries ends up removing the audience’s understanding of how nuanced places actually are explains Pesic.

“The yellow colour grade creates a feeling of tension and action,” she explains. “In the stories taking place in regions such as Latin America, Africa or South Asia, which are visually presented as hot, dry and dusty— even though not all parts of these regions are as such. This yellow filter evokes a feeling of backwardness and poverty.”

But, Pesic points out that even though the US can get just as hot, it typically gets the associations of a blue palette which “represents futuristic, vibrant and progressive societies.”

“And, of course, the grey is reserved for Eastern Europe, suggesting gloominess, depression, unhappiness, because what else can these people do under authoritarian regimes but be gloomy and depressed?” she ironises.

Careless or clichéd colour grading is often a product of the biases of the filmmaker, suggests Pesic.

Quickly, the audience begins to associate whole regions with the emotion that the colour palette gives across.

An issue, for the MDI, is that there are no professional standards for the depictions of geographical regions.

Unlike in other industries, there is no governing body for MRI to complain to if they’re not happy with a depiction.

“But, if we are to tell a filmmaker that the way they colour a place, the tropes they use for apparently artistic reasons, can have and do have a serious impact on real people, we could be accused of a lack of appreciation for their art or that we’re in favour of censorship,” Pesic says.

While she admits there are filmmakers who are fully aware of the impact their films have and use their creativity responsibly, Pesic takes issue with filmmakers who, in the pursuit of entertainment, don’t want to be called to account for spreading stereotypes.

“They are concerned with the story and how to get that story to the viewers. If that story fosters an image that an entire country is dirty and dangerous, it can damage the place, even on an economic level,” she says

“Why not portray countries as they actually are?” Pesic asks. “Why would creativity stop in the face of reality?”

Is the Edinburgh Fringe pushing out smaller acts?

What will the Armie Hammer documentary expose?