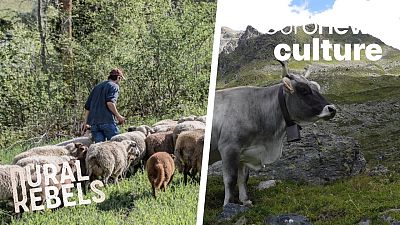 Georg and Claudia Blunier have been living their dream of sustainable farming in the Swiss mountains for 8 years now.

The couple met during their time studying Fine Arts in Zurich and decided to spend the summer after their graduation in the Swiss Alps. It was there that they fell in love with agriculture.

In 2014, without any prior farming experience, they decided to take the leap and began running an idyllic farm in Domleschg, located in the mountains of Graubünden in eastern Switzerland.

"The owner gave us the farm knowing that we had no experience. This was maybe the most surprising thing," said Georg Blunier.

Today, they look after 18 Grauvieh suckler cows, a herd of sheep, a few Turopolje pigs and a flock of chickens and also grow 40 different types of vegetables.

They pride themselves on supplying some of the best tasting and most sustainable meat in their region, due to their close-to-nature attitude and careful handling of the animals.

The animals spend the whole year outside on the pasture and can find shelter in the stable on harsh winter days. They have straw-littered lying areas and only eat organic produce from the surrounding meadows.

Georg and Claudia also ensure a stress-free slaughtering process for their animals.

While cattle are usually crammed onto large trucks and transported to far away slaughterhouses, their farm slaughters its animals on site - allowing them to die where they grew up under stress-free conditions.

"We try to sell as much as we can direct either to customers or direct to shops. I think it's just a good thing to keep the production up here and also to have the value added here. And not just give your cattle for a low price to the centres," explained Georg.

Rural Rebels is a series that brings you stunning stories of food and drink producers around Europe who are rejecting industrial agriculture and modern lifestyles and instead embracing traditional and sustainable practices. Watch the full episode by clicking on the video player above.

Why is this Basque farmer fighting to revive this colourful corn?