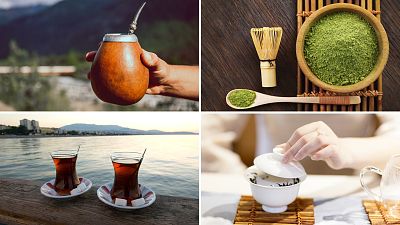 21 May marks International Tea Day, a day to raise awareness of the long history and the deep cultural significance of tea around the world.   -   Copyright  Canva Photo
By Theo Farrant  •  Updated: 21/05/2022

Did you know, drinking tea is a tradition that goes back almost 5,000 years, starting in ancient China?

Since then, tea has spread across the world, with each culture adapting the way they drink it.

So, in honour of International Tea Day (21 May), we thought we’d take a look at just some of the many ways people out there like to enjoy their brew.

Where better place to start, than the home of tea, in China.

One of the most popular methods for making tea in the country is called ‘Gongfu cha’, which means ‘making tea with skill’.

The Gongfu cha way of making tea is as much about the ceremony as the tea itself. To make it properly, you’ll need to use tea leaves and serve it in a proper Chinese tea set.

The Fenghuang (Phoenix) Mountains are where Dancong wulong (oolong) teas are grown, and they have 700-year-old trees in that region.

Countless generations have perfected the art of not only growing and producing teas, but also drinking them.

In recent years, Bubble tea has become known all around the world but it’s originally from Taiwan.

It was invented in the 1980s and is made from a combination of tea, milk, fruit juice and … tapioca balls, also known as “boba”.

Bubble tea is sweet, refreshing and colourful. You’ll usually get it served in a transparent cup with a straw, which lets you suck up the drink’s signature tapioca balls.

Yerba Mate is a high-caffeine herbal tea, originating from Argentina.

It was originally cultivated by indigenous South American people, long before European colonisation. The tea has a strong, earthy and bitter taste.

It’s made by soaking dried leaves in hot water and traditionally served out of a gourd, a kind of rounded container, with a metal straw, known as a bombilla.

There are few things that the British are known for more than their love of tea. The most popular tea in the UK is the classic English breakfast, a blend of black tea, served with milk and sometimes sugar.

Most Brits agree that using dairy milk is essential to a good ‘cuppa’ but they’re not in agreement over the best way to make it: milk first, or tea first - a question that divides a nation.

While English Breakfast tea is traditionally served in the morning, approximately 100 million cups of tea are drunk every day in the UK.

And don’t get this confused with Britain’s traditional ‘afternoon tea’ which involves drinking tea and eating scones, sandwiches or pastries as an afternoon snack, around 3 to 5pm.

In Morocco, one of the most popular drinks is mint tea, made by steeping green tea with mint leaves.

It is Moroccan etiquette to offer tea to any visitors that might stop by and for special occasions the tea is made ceremoniously in front of the guests.

Usually the host pours the tea from at least 30cm above the glass. This helps form some foam and aerates the tea but is also a sign of respect.

Instead of infusing water with dried leaves, Matcha, from Japan, is made by whisking powdered green tea into boiling water. Meaning you actually eat the tea leaves. That’s what gives Matcha its extremely strong flavour.

The tea holds a special place in Japanese culture and is commonly served with a sweet known as wagashi.

Turkey produces about six to 10 per cent of the world's tea. It’s also the most commonly consumed hot drink. Serving tea is a key part of Turkish culture and hospitality.

A strong, black tea is the cornerstone of Turkish tea culture. Typically it’s prepared in two stacked teapots and served in a tulip-shaped glass. The glass lets you admire the colour of the tea while drinking it - but be careful to hold it by the rim so you don’t burn your fingers!

Milk is never served with Turkish tea but it’s common to serve it with cubes of sugar.

Check out the video above to see how these traditional teas from around the world are made!

Peruvian Clown Day: Hundreds of clowns take to the streets of Lima