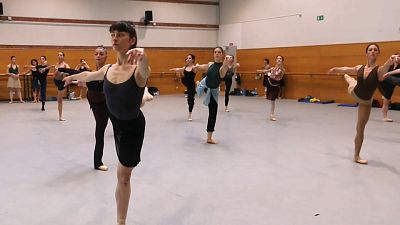 Spain's National Dance Company is helping many professional dancers suffering due to the war in Ukraine.

Several classical dancers whose lives were turned upside down have been able to join the dance company and find a new home.

Anastasia Kovalevska could never have imagined that the day before the invasion was her last rehearsal.

"The theatre management told us from one day to another that all performances were cancelled and many people started to leave Ukraine. And a month after that they told us that classes were back on but there weren't enough people left in Ukraine to do them," she said.

Not only have they been accepted into the Spanish dance company, but its Ukrainian pianist, Viktoria Gluschenk, has helped with everything they need to get settled in Spain: paperwork, getting public transport and social security cards, even setting up free dental treatment.

Viktoria Gluschenk was also in Kyiv when the war started and knows its hardships. Fortunately, she was able to bring her mother to the Spanish capital too.

A total of seven Ukrainian dancers joined the dance company thanks to the 'Emerging Talent Programme', which seeks to attract international and national students in their final years of dance studies. Three of them will perform Giselle at the Teatro Real in Madrid in mid-May.

For the director of the company, Joaquín de Luz, it's extremely important that the public knows the dancers' participation is not an act of charity.

To him their participation is based on "artistic criteria" and opening their arms to them. "Putting them on stage is our responsibility to the public, to this great theatre, to this company and to dance in Spain," he adds.

After a beginning marked by sadness, colleagues and management have made them feel almost at home.

All of them were able to make it to Madrid due to friendships they made with fellow Spanish dancers before the war broke out and these friendships have only strengthened since they arrived.

'A kilt for Zelensky': Scottish mill weaves tartan for Ukraine