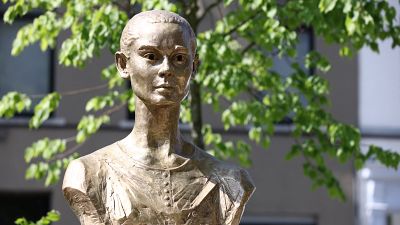 The garden inaugurated in Hepburn's name is located just across the road from her childhood home   -   Copyright  Kenzo Tribouillard/AFP
By Euronews with AFP  •  Updated: 05/05/2022

Brussels, the birthplace of Audrey Hepburn, has inaugurated a garden in the film star's honour,  just across the road from her childhood home.

The honorary garden is complete with a bronze bust of the film and fashion icon.

Hepburn's son Sean Hepburn Ferrer, an American producer and author was in attendance at the unveiling of the statue.

Who was Audrey Hepburn?

The petite Oscar-winner and 1960s icon was born Audrey Ruston on May 4, 1929, at 48 Rue Keyenveld, now a quiet pedestrianised backstreet tucked behind Brussels' main shopping artery.

The daughter of a Dutch aristocrat and a British banker, she stayed in Brussels until she was six when her father suddenly left the family home.

Inaugurating the statue, Hepburn's son Sean told of how she moved in with her maternal relatives in the Netherlands, where she remained during the harrowing years of the World War II German occupation.

After the war, Hepburn trained as a ballerina and moved to London, where she became an actress in the West End theatre scene before eventually landing film roles.

In 1955, romantic comedy Roman Holiday made the then 23-year-old a star and in 1961 her role as Holly Golightly in 'Breakfast at Tiffany's' confirmed her as a Hollywood icon.

She is one of the only actresses to have ever won an Oscar, Tony, Grammy and Emmy award, making her an EGOT.

Hepburn was also praised for her humanitarian work after becoming a UNICEF Goodwill Ambassador in 1988.

May the 4th be with you: how the date became a Star Wars phenomenon