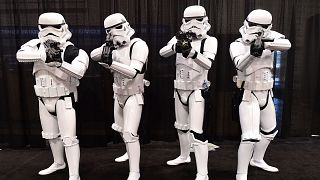 Star Wars is one of the most successful and influential movie franchises of all time.

The franchise which started as a film series, has been expanded into TV shows, video games, comic books, and theme parks.

But why is it that every year on the fourth day of May, fans around the world gather to show their love and appreciation for George Lucas' creation.

First let's take a look at some history.

The History of Star Wars

It all began in 1977, when Star Wars: A New Hope (Episode IV), written and directed by George Lucas, was released to the world and instantly become a beloved cultural phenomenon.

The film earned an enormous $775 million at the global box office and developed the franchise into a hugely lucrative merchandising industry.

Star Wars was extremely innovative for its time. It began a new era of special effects and pioneered the idea of an expansive fictional universe - a concept that we are so accustomed to seeing today, with the success of Marvel and Harry Potter.

'A New Hope' was followed by two sequels, 'The Empire Strikes Back' (1980) and 'Return of the Jedi' (1983), which both also received high praise from audiences.

Lucas later returned to the series to direct a prequel trilogy, consisting of 'The Phantom Menace' (1999), 'Attack of the Clones' (2002), and 'Revenge of the Sith' (2005) - which all received less critical acclaim than the original trilogy.

Why is Star Wars Day on May 4th?

As most fans know, the fourth day in May become known as Star Wars Day because of the play on words it has with the phrase, 'May the force be with you,' used by Jedi Masters throughout the franchise.

The reoccurrence of this phrase in the movies gave way to the saying, 'May the 4th be with you'.

The earliest use of this play on words dates back to 1978, one year after the release of 'A New Hope', where American newspapers cleverly used the phrase in the headlines on Independence Day on the 4th July.

The saying also started to be used in the United Kingdom, when on May 4th 1979, newspapers used the slogan to mark the day Britain's new prime minister, Margaret Thatcher, assumed office.

The London Evening News headlined with, 'May the Fourth Be With You, Maggie. Congratulations!'.

But the first official celebration of May 4th took place much later, at the Toronto Underground Cinema in 2001.

Fans took part in a full day of Star Wars-themed festivities, including a movie marathon and a costume contest.

And now, 45 years after the release of the first film, the phenomenon shows no sign of abating.

Birthplace of Audrey Hepburn honours her with garden and statue