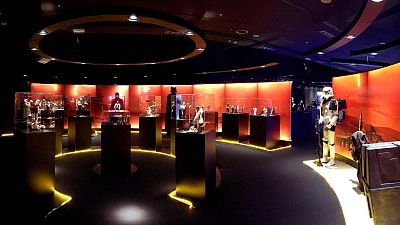 What better way to celebrate May the 4th than a visit to the largest ever Star Wars fan exhibition   -   Copyright  'The Fans Strike Back' exhibition
By Euronews with AP  •  Updated: 04/05/2022

Among them is 'super fan' Daniel Prada, based in Spain, who started collecting memorabilia 25 years ago. His collection is now on display, alongside pieces from other fans from all across the world, in 'The Fans Strike Back' exhibition.

The enormous collection, currently on display in New York, features over 600 Star Wars items and offers the perfect day out for fans looking to celebrate May the 4th (Star Wars Day).

A journey into both sides of the Force

There are also 50 one-of-a-kind custom-made sculptures, including a 6ft tall life-sized reconnaissance droid and a Starkiller Base command bridge.

"There are pieces that he's made in collaboration with others," explained the exhibition executive producer, John Zaller. "So, for example, the pod racer just in the other room from here, it took them three years to make that, a group of five people. The destroyer bridge that is a little bit further into the exhibition was five years in the making."

There are life-size statues and intricate figurines, as well as a virtual reality area for fans to explore.

"It's been incredible to see people coming through saying, Oh, I've made one like that or, oh, that's how that's how he did that," Zaller said.

Many visitors admit to being blown away by the craftsmanship of the collectibles.

"So the thing I like the most is the handmade stuff, the things people had the time to make," explained guest visitor and Star Wars fan, Tony Mita.

"People like me who basically grew up on it, I think like even kids today, like, you know, children, teenagers like, see Star Wars and still see the amazingness, still see the big grandness of it all and the mythic storytelling of it all," Olney reflected.

Zaller said the exhibit will be on display in New York City through the end of the summer. He added that other cities have shown interest in hosting the exhibit in the future.

Check out the video above for a look inside the exhibition

From Rome to Drôme: Antiquity and gastronomy in the Northern Rhone

Got a spare €20 million for a dinosaur skull?