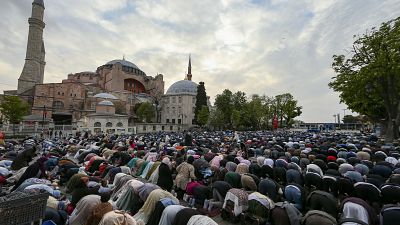 Muslims around the world are getting into the festive Eid spirit as the holy month of Ramadan ends   -   Copyright  Emrah Gurel/AP
By Theo Farrant  & AP  •  Updated: 02/05/2022

Muslim worshippers across the world are celebrating Eid al-Fitr to mark the end of the holy month of Ramadan, when faithful fast from dawn to dusk.

Eid al-Fitr, meaning 'Festival of Breaking the Fast', falls on the first day of Shawwal in the Islamic calendar. However this does not always fall on the same day, as the start of any lunar Hijri month varies based on when the new moon is sighted by local religious authorities.

Traditionally, Eid al-Fitr, often referred to as 'Eid', is a three-day feast but can be longer or shorter depending on the country. It's a time for friends, family and giving thanks to God.

How is Eid al-Fitr celebrated?

Eid usually begins with morning communal prayers, to show appreciation to God. These take place by congregations in open area such as a field, community centre, or mosque.

During Eid, Muslims greet each other by saying 'Eid Mubarak', which is Arabic for "Blessed Eid".

While there is no set garment for any one country, it is common for Muslims to wear their best traditional clothes, inherent to their culture.

Prayers are then traditionally followed by a big meal, between family and friends, where gifts are shared.

This year, Muslims around the world are observing Eid al-Fitr in the shadow of a surge in global food prices exacerbated by the war in Ukraine.

Against that backdrop, many are still determined to enjoy Eid amid easing of coronavirus restrictions in their countries while, for others, the festivities are dampened by conflict and economic hardship.

Muslims are a relatively small minority in Europe, making up roughly 5% of the population - but Islam is the second-largest religion in Europe after Christianity.

In Eastern Europe there are several Muslim majority countries, including Kosovo (96%), Albania (85%) and Bosnia and Herzegovina (55%).

In Bosnia and Herzegovina, head Imam Husein Kavazovic led prayers at the Gazi Husrev-beg Mosque in Sarajevo where worshipers filled the mosque, its courtyard and the adjacent streets.

Thousands of Muslims in Kosovo on gathered at a central mosque in the capital Pristina to celebrate.

May the 4th be with you: how the date became a Star Wars phenomenon

Take a look at this stunning Water Light Festival in Italy