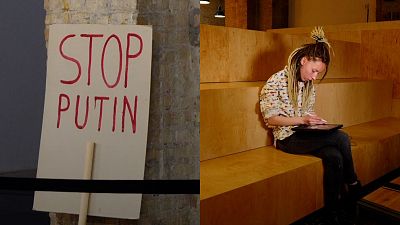 The Russian invasion of Ukraine has forced millions to flee the country, among them are some of the country's most talented artists.   -   Copyright  AP Photo
By Euronews with AP  •  Updated: 27/04/2022

Hanna Zvyagintseva was born in the Ukrainian capital, Kyiv, and had lived there her whole life.

That is until the Russian invasion began.

She stayed put in the city with her mother for a few weeks until they took the decision to join millions of other Ukrainians and flee.

For a month she has been living with her mother in Berlin. Her art now relates to her own experiences from seeing the war up close, and her life as a refugee.

"We are feeling guilty. Everyday. Because you are alive. You are here. You can work. You can sit with an iPad," she says.

An outlet for trauma and grief

Zvyagintseva and around 100 other Ukrainian artists have found a workspace in the German capital, with the help of the local Berlin government.

The large space, located in an old factory in the east of the capital, has become a gathering space for Ukrainians that worked in the art and culture scene in Kyiv and other Ukrainian cities - where they can share ideas and the difficult feelings they have sparked by the war.

Drawing and painting have given them an outlet for their trauma and grief.

"I feel like I see in the streets of Berlin, half of Kyiv right now. So, I feel like I'm maybe living there," says Katja Blazheichuk, cultural coordinator for the Berlin-based Ukrainian organization Vitsche that runs the workspace.

One of Zvyagintseva's animations shows a Russian passport morphing into a weapon.

She created it the day before the invasion started when she realized that a large part of the Russian population supported an attack on Ukraine.

Life as a refugee in Berlin

Life as a refugee in Berlin is not easy. The main problem is finding a place to live. Many German families have taken in refugees, giving them spare rooms and sofas to sleep on. But for many, it is not a long-term solution.

And with tens of thousands of Ukrainians in Berlin, finding an apartment to rent is hard.

Zvyagintseva says that dealing with the emotional scars of the war and fleeing home also takes time to deal with.

"It is hard to do simple things. What you used to do. Everyday. And when I came to Berlin, one first week I just sitting, and looking to window," she says.

No one knows for sure how many Ukrainian artists are now living in Berlin.

But the two capital cities had close connections before the war, with many Ukrainians travelling to Berlin and Berliners going to live in Kyiv.

"A lot of people have been moving or working here already. So, this connection Berlin-Kyiv is pretty strong," says Blazheichuk.

"And also, a lot of Berliners were also in Kyiv during last three years, so we established this kind of connection between our art communities."

Artists uprooting themselves and going to live in another city has become a particularly European tradition.

The question is, is it temporary relocation or permanent?