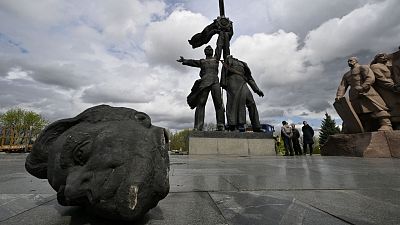 Ukrainian authorities on Tuesday dismantled a huge Soviet-era monument in the centre of Kyiv meant to symbolise friendship between Russia and Ukraine   -   Copyright  AFP
By AFP  •  Updated: 27/04/2022

"It took some effort but the Soviet sculpture of the two workers - symbolising the reunification of Ukraine and Russia - was dismantled this evening," Kyiv mayor Vitali Klitschko said in a statement on social media.

He had earlier explained the decision citing what he called Moscow's "barbaric desire to destroy our state and peaceful Ukrainians", with Moscow's full-scale invasion launched on February 24.

"The Russian worker's head came off when they tried to lift the sculpture," Klitschko recounted, saying workers had initially struggled but ultimately succeeded in removing the large figures.

"In the same way, we have to pick up and expel the enemy and the Russian occupier from our land," he said.

Klitschko said a second component of the sculpture would be removed later and the giant arch above the workers would be renamed and illuminated with the colours of the Ukrainian flag.

He proposed a new title of 'The Ukrainian people's freedom arch'.

Klitschko also said city authorities were working on plans to demolish around 60 monuments in the capital related to Russia and the Soviet Union.

Meanwhile, Klitschko added, some 460 streets and other objects in the city are slated for renaming.

Exhibition in Kyiv tells the stories of journalists killed in war