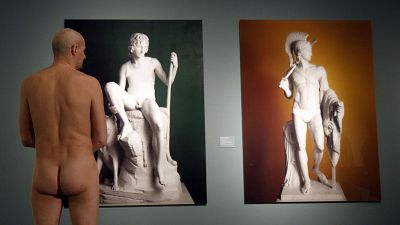 It’s 50 years to the day since Burt Reynolds reclined nude on a bearskin rug for Cosmopolitan’s centrefold, a cheeky, daring and groundbreaking moment for celebrity nudity.

Reynolds himself later said that the shoot had damaged his reputation as a serious actor and hurt the release of his upcoming film ‘Deliverance,’ considered by many at the time to be his biggest role yet.

"Standing ovations turned into burlesque show hoots and catcalls," the actor wrote in his 1994 memoir, ‘My Life’.

"They cared more about my pubes than they did the play."

Despite these unfavourable reflections from the man himself, at the time, the two-page spread was an exciting moment for sexual liberation.

Reynolds was Cosmo’s first-ever male centrefold and had been deliberately chosen by longtime editor Helen Gurley Brown, who proposed the shoot to him during a commercial break when they were both guests on ‘The Tonight Show’.

Noting that men had been ogling ‘Playboy’ since 1953, the print media legend was on a longtime mission to satisfy the “visual appetites” of women, believing the now infamous image would be a milestone in the sexual revolution.

Burt Reynolds on Why He Agreed to Be One of the First Men to Pose Nude for Cosmo https://t.co/xSC3jjv5Fopic.twitter.com/07x604a5cP

As the first issue of ‘Playgirl’ was released a year later, it would seem that Brown had her finger on the consumer pulse, but has the spread had the lasting impact the famous editor anticipated it would?

“I’m not old enough to remember it,” says Adrian Lourie, editor of the pin-up magazine Meat, which celebrates its 10th anniversary this year.

“But I remember the mythology around it being the first one of its kind and somebody really famous. It was a pretty radical step for a magazine like Cosmo…and propelled men into that sphere of being gazed at in that way.”

“It was a well-known celebrity in a well-known respected magazine,” adds Peter Lehman, professor Emeritus in Film and Media Studies at Arizona State University and author of ‘Running Scared: Masculinity and the Representation of the Male Body’.

“But it’s not full-frontal male nudity, his arm is positioned carefully to cover the genitals.

“I think the Cosmopolitan article and its importance has been over-exaggerated because of the so-called prestige of the publication,” says the author.

Year of the dick?

In terms of both nudity and gender equality (as if the two aren’t linked) we’ve come a long way since Burt's hairy chest was in the crease of a magazine, but how far exactly?

On-screen male nudity has long been one of the few areas where women are ahead of men, leading to more than a few raised eyebrows.

Era-defining series ‘Game of Thrones’ for example was famous for nude scenes and often derided as “tits and swords” but it wasn’t until season six that a penis put in an appearance. Meanwhile, cult show ‘Sex and the City’ regularly showed the breasts of the central actresses but didn’t exhibit a penis once in six seasons.

Taboos around the male organ do however seem to be slipping away as shows like ‘Euphoria,’ and ‘White Lotus’ present the genitals of their actors; even the ‘Sex and the City’ sequel ‘And Just Like That’ has been closing the gender nudity-gap.

But the attendant plethora of media coverage of on-screen male nudity shows that the more we see it, the more we feel compelled to talk about it.

“It’s still a little bit scandalous and something to make news about, it involves the guys that do it justifying it and explaining it and not just a matter of fact thing,” says Lourie.

It’s true that on-screen male nudity elicits a fascination from fans and critics which female nudity rarely does, with some actors becoming defined by their proximity to and participation in on-screen nudity.

Male actors like Richard Gere and Harvey Keitel came to be renowned for their full-frontal nude scenes, but it wasn’t until Ewan McGregor (who has shown his penis in no fewer than four films) that the measuring tape was truly brought out.

“There was a lot of attention across the media not just that he appeared nude but always the penis size.”

The fascination with McGregor’s junk was only supplanted by Michael Fassbender’s appearance in ‘Shame’.

The starring role of Fassbender’s flaccid member even prompted his ‘Prometheus’ co-star Charlize Theron to bizarrely announce, “Your penis was a revelation,” when accepting an award at the Human Rights Campaign Gala in 2012.

But does this obsession simply stem from the rarity of male nudity on our screens? Lehman thinks not.

“With masculinity in our culture we think everything can be measured by quantity. Before we even get to penises it’s how tall is a man? How muscular is a man?

“Those distinctions have been around for quite a while in our culture and they’re still operative in many ways.”

The growth of penises (as it were) on our screens is in part due to changes in the media landscape.

When Reynolds did his Cosmo spread Hollywood films were all rated by the Motion Picture Association of America and nudity on television in the US was largely frowned upon. Filmmakers would self-censor accordingly to avoid getting a rating which would kill them in the box office.

Censorship laws in Europe vary widely, with Italy only repealing a century-old government censorship law in 2021.

But it was the advent of cable services and later streaming platforms that really changed the game, with their lack of censorship and regulation allowing for all kinds of never-before-seen scenes.

HBO led the way with the groundbreaking prison series ‘Oz,’ but these days Amazon, Apple TV+ and the rest can get away with pretty much anything. Netflix even animates children’s genitals on the popular puberty-based show, ‘Big Mouth’.

But there may be more to these on-screen penises than meets the eye, as it is revealed that many actors who bare it all are in fact wearing prosthetics.

Actor Eric Dane donned a prosthetic penis for a seven-minute monologue in ‘Euphoria,’ and Steve Zahn did the same for his testicle-checking scene in ‘White Lotus’.

Since there’s now an arena where men are faking it for a change we have to ask; are actors simply squeamish about showing us their bits? Perhaps not.

“If a character is seen as powerful, as strong, as heroic, as a good lover he has to have a big penis if you show it,” says Lehman.

“They’re taking masculinity and concepts of strength and achievement and tying it into the literal penis which is just an organ.”

It is the deeply rooted, patriarchal idea of the powerful phallus which motivates use of prosthetics, a practice that confirms the incorrect assignment of meaning to the penis, according to Lehman.

“There is no such connection, seeing someone's penis tells you nothing, absolutely nothing,” says Lehman.

This even stretches to the central characters played by more famous actors using prosthetics or foregoing nudity altogether, while minor characters and those with a lesser degree of celebrity do the real thing.

In the new HBO show ‘Minx,’ (loosely based on the creation of ‘Playgirl’) the central male character appears in a lineup of nude models.

However, it transpires that the male lead played by Taylor Zakhar Perez was wearing a prosthetic penis all along, while his lesser co-stars were not.

The idea, Lehman says, is to preserve the “mystique” of the actor or character, whilst also reinforcing the link between penis size and personality.

“There’s no part of a woman’s body or any other part of the man’s body that is so highly laden with meaning,” he says.

“It’s almost unimaginable that you would get to see James Bond’s penis isn’t it? That’s because of this idea that James Bond is such a big powerful man and he seduces women all he wants, kills all the evil villains, how could we ever see his penis because nothing we could see would ever live up to it!”

When it comes to male nudity then, it would seem the answer is always the patriarchy.

50-years ago Brown wanted to balance the books by turning the gaze on men, but little did she know how deep this runs. While Brown may have got the ball rolling, how could she have known that today our deep-seated cultural obsession with the phallus means that most penises we see on TV are fake.

Who knows if Burt Reynolds would have, given the opportunity, shown his dick to the world. One thing is for sure though, the gruff strongmen and romantic leads he tended to play would have necessitated a certain level of concealed mystique (otherwise known as a prosthetic penis) to make the character believable.

Behind Liza Minelli and Lady Gaga's touching moment at the Oscars