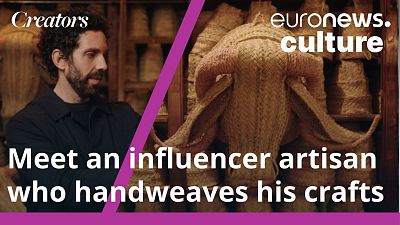 Javier Sánchez Medina was preparing to take exams to become a firefighter when he had a change of heart and took the bold decision to become a craftsman and start his own business.

Friends and family called him crazy when he announced his idea: he wanted to sell handmade objects created and woven from natural, local materials like esparto grass, dried reeds and straw.

Little did they know he would go on to become a social media influencer and his work would garner international attention.

No one in Sánchez Medina's family had worked in this particular trade before but he had a strong connection to the materials from his childhood.

“I remember my grandfather working in the courtyard," recounts Sánchez Medina. "Braiding the bases of the bulrush (reed) chairs and also weaving the curtains. Because, in Extremadura, it is very hot and to keep the house cool the curtains were sewn and braided with ‘pleita’ grass. So I had these memories very much in my mind.

"The intention, the idea, was to come to Madrid and create something of my own, something that tells a bit about who I am and where I come from.”

In his search for an object of both beauty and significance, Sánchez Medina started sketching out designs around the bull, a symbolic animal for Spain. The final design was a large bull’s head mounted on a wall, like a hunting trophy, but 100% handcrafted from dried natural grasses. He called it an ‘ecological trophy’ and it has become his trademark piece.

“An ecological trophy is made only with pleita grass, twine and bulrush... and a lot of patience,” adds Sánchez Medina.

When Medina first launched his business he worked alone, so a standard ‘ecological trophy’ could take three or four days to create, and a large one more than a week. Now he has a small team handmaking them in parts, but it’s still very much a family affair.

“My father is still helping me from Badajoz, he creates the first part which is the framework and braiding of the pleita … My family has somehow been part of this project in every way, because I have scissors and chisels from my grandfather, the aprons are made by my father. The curtains in the store were made by my mother.”

In fact, Medina’s store is as much a work of art as his creations. Searching to create a traditional style for his shop, Sánchez Medina opted to recover and renovate old materials, giving his cosy workshop the aura of a time capsule from a different era.

“All the objects and furniture are recovered, even the bookcases are made by me," says Sánchez Medina. "These are recovered from old shops. This was from an old shoe store here in Madrid. I wanted everything to be authentic.”

Sánchez Medina believed he could make a successful business, enough to make a bit of money, pay the bills.

"Never in my life, did I think I could go any further. It came somehow, without wanting it. I created a page on Instagram, and as a result of that, things began to happen.”

A well-known designer from the US began to show an interest in Sánchez Medina’s work and ended up exhibiting him in LA, which brought him international attention.

Sánchez Medina went on to be featured in international magazines and to work with high profile international clients. A visit from Sarah Jessica Parker to his store in Madrid also got a lot of visibility online.

His social presence continued to grow, reaching more than 30,000 followers as of spring 2022.

“In the end, it's not the product itself, it's what surrounds the product, both you and the piece, your work…

"I think that things with effort and soul, end up working."

In this episode of Creators, a series where we get inside some of the world's top creative minds, Javier Sanchez Medina talks family, natural materials and social media success. For more on this story, watch the video in the media player above.

Meet the artisan jeweller whose ethical designs are inspired by nature