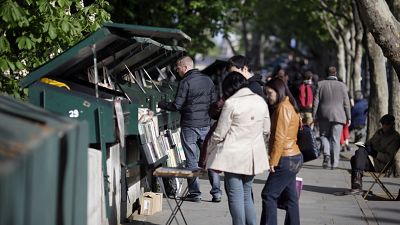 People look at books and posters as they walk past booksellers "bouquinistes", near the river Seine   -   Copyright  KENZO TRIBOUILLARD/AFP
By Euronews  with AFP  •  Updated: 22/02/2022

Paris town hall has been inundated with applications from booksellers to take a hallowed spot on the River Seine.

Seventy-one applications have been filed to replace 18 booksellers from the quays of the city's iconic river.

"This is the largest number of candidates for ten years", said Olivia Polski from the office of mayor Anne Hidalgo who launched the call for applications.

Polski says she thinks she has found the right profiles with candidates being "second-hand goods dealers, reading enthusiasts, artists".

The chosen few will become owners of the iconic green boxes with strictly regulated dimensions that are so well known to tourists on the banks of the Seine. You will find them between Saint-Paul and the Tuileries on the right bank, the Arab World Institute and the Musée d'Orsay on the Left Bank.

The new booksellers will have to buy the boxes from the departing owners but will not pay a joining fee, a decision taken by the town hall to protect this centuries-old tradition in the heart of the capital.

Weakened successively by the onset of mass protest movements such as the gilets jaunes and then by confinements brought by COVID-19, which forced them to close for extended periods, some booksellers have returned less and less to open their boxes, Polski explains.

A committee will come to a decision on March 11.

The 240 bouquinistes along the river have also been striving for Unesco recognition as Intangible Cultural Heritage, but have not made the list as yet.

This summers must-reads, according to TikTok's book critics

Truffle hunting gets the UNESCO treatment after centuries of know-how

The real story behind the Czech Christmas glass beads