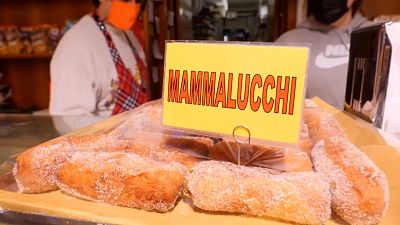 Lovers of the Venice Carnival know it means masks and costumes, but also tasty delicacies such as frittelle and galane.

But only the most experienced know about mammalucchi: the mouth-watering fried, sugary pastry which began life as an accident.

The original bakery in the lagoon city where you can have an authentic mammalucchi is Pastricceria Bar Targa, where Marzo Rizzetto and his family have been offering their customers this quirky pastry for thirty years.

A popular snack for gondoliers

Just a short walk from Rialto bridge, it is an early morning stop for gondoliers who recharge their batteries with mammalucchi and coffee before beginning a day of intense rowing to take tourists through the city's canals.

Mirco Zotti wears the typical hat and striped shirt of the gondolier and laughs as he sips his coffee because just the name, "mammalucchi," amuses him and sends him on a trip down memory lane.

The Italian word mammalucco literally means a member of a militia originally made up of slaves converted to Islamism, which, between the 13th and 16th centuries, acquired great political power in Egypt, before being defeated by Napoleon I.

But during the last century the word became a popular synonym for 'silly person', though it is not clear why.

It was the classic thing a mother might say affectionately to her offspring, if the child did something foolish.

And it was with reference to himself that one day in the late 1980s Sergio Lotto, one of the most talented pastry chefs in Venice, exclaimed "che mammalucco!" (what a silly person!) after having made a mistake in measuring out the ingredients of an Egyptian cake.

"Once, in the world of pastry, recycling was essential. So he tried to make a new dough by mixing it with custard and adding the orange peel, while the raisins were already inside because they were part of the Egyptian dessert," explains Marco Rizzetto, owner of "Pasticceria bar Targa".

The pastry chef realized that something new had been created and instead of baking it in the oven, he ended up frying it.

Thus a new carnival pastry was born. It is now slowly gaining ground among the more popular frittelle and galane, pastries which are similar to others you can find, under other names, across Italy during carnival.

Carnival is in fact the time of celebration, often unrestrained and a little irreverent, when people can give free rein to pleasure and gluttony before the self-restraint demanded of the period of Lent in the Catholic Church.

But Mammalucchi, with their cylindrical shape and texture - crunchy on the outside and soft on the inside - are particularly unusual, and are attracting an increasing number of curious foodies.

Pastry chef Andrea Annicchiarico, whipping up the 1,000 or so mammalucchi that are sold in one Carnival weekend, says he does not know the secret to their popularity, and compares the mammalucchi to a song that has unexpected success.

The few Venetians who do not know it yet try it in search of an alternative to the classic traditional carnival pastries, but also more and more tourists enter the Pasticceria Bar Targa to look for what is considered a real treat for a select few.

In the meantime, the secret of the mammalucchi passes word of mouth among the tens of thousands of people walking through the alleys and along the canals, decked out in colourful and feather-adorned costumes, and ready to exclaim "what a mammalucco!"

Who built Stonehenge? A new exhibition in London might have the answer