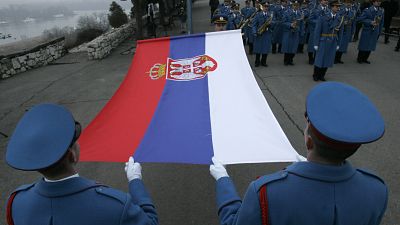 Serbia celebrates its National Day, also known as Statehood Day on February 15. The two-day holiday commemorates the start of the 1804 uprising against the Ottoman Empire that developed into the Serbian Revolution. February 15 is also the date when the first Serbian constitution, a progressive agreement aiming to protect human rights known as the "Sretenje Constitution", was adopted in 1835.

Celebrated as one of the most culturally and historically significant days for Serbia, Statehood Day was first recognized as a national holiday in 2001.

From a geographical and geostrategic perspective, Serbia stood on a "geo-political crossroads" from the earliest times, a gateway to all European compass points.

It stood in the way of the expansion of the mighty Ottoman Empire in Europe in the 14th century, and after a series of heavy defeats in battles, the Turks finally seized the whole of the northern Serbian territory in 1459 when Smederevo fell into their hands.

During that time, the Turks persecuted the Serbian aristocracy, determined to physically exterminate the social elite. Since the Ottoman Empire was an Islamic theocratic state, Christian Serbs lived as virtual servants - abused, humiliated and exploited.

Consequently, they gradually abandoned the developed and urban centres where mining, crafts, and trade were practiced, and withdrew to more hostile mountain areas breeding cattle and living by modest farming.

During the centuries-long rule of the Turks, riots broke out many times and the Serbs were important allies of European powers, especially Austria, in resisting.

Many of the uprisings were bloody.

One especially brutal event, known as Slaughter of the Knezes (the nobles) was the tipping point. Fearing that the Sultan would make use of the Serbs to oust them, they decided to execute the leaders. A total of 72 noble Serbs were assassinated, and their heads were put on public display.

The event triggered the First Serbian Uprising, aimed at putting an end to centuries of Ottoman occupation.

Initially a local revolt against renegade janissaries, elite infantry units, who had seized power through a coup, it evolved into a war for independence (the Serbian Revolution).

Resulting from the uprisings and subsequent wars against the Ottoman Empire, the independent Principality of Serbia was formed and granted international recognition in 1878.

On February 15, Serbia also marks another important anniversary - the day of the adoption of the first democratic constitution, one of the most liberal in Europe at that time.

The "Sretenje Constitution" (Candlemas Constitution) as it is known today, divided the power into legislative, executive and judicial branches, which is still considered the standard of democracy and constitutionality today.

The constitution was drafted by Dimitrije Davidović, Prime Minister of Serbia, Minister of Education and chief secretary of cabinet to Prince Miloš Obrenović I, and was adopted in the City of Kragujevac in 1835.

This noble writer, philosopher, journalist, publisher, historian, diplomat and the founder of modern Serbian journalism and publishing, based it on the French constitution of 1791 and the constitutional charters of 1814 and 1830, and the Belgian constitution of 1831.

The Sretenje Constitution established democracy in Serbia and created the grounds necessary to address the important issues of the Serbian society of the time, such as national emancipation, dissolution of feudal institutions and human rights.

A special paragraph of the Constitution is dedicated to personal rights of the citizens: sanctity of personal freedom, inviolability of property, freedom of confession. It reserved special attention for equality and the right to choose.

The Constitution also contains provisions relating to a number of procedural rights such as ne bis ne idem, nulum crimen sine lege, (literally 'not twice about the same') right to appeal to a higher power, and prohibition of retroactivity.

However, the adoption of the Sretenje Constitution was not met with approval abroad.

The largest European empires of Russia, Turkey, Austria, Prussia, as well as many smaller countries, did not have Constitutions at the time, nor did they adopt them in due course. That is why all of them opposed and agreed that the constitution was revolutionary and against their feudal order.

Questions were even put as to what the use would be for ministries in Serbia, including the ministry of foreign affairs, and what the national flag would serve as.

They called for their dismissal with an explanation that "the Constitution should be changed because it introduced French seedlings into a Turkish forest".

Orthodox Christians in Serbia also mark the Candlemas - Sretenje - on February 15, also known as the Feast of the Presentation of Jesus Christ.

Thus, there is a belief that winter and summer meet at Candlemas.

If a sunny day dawns on Sretenje, and the bears, frightened by their own shadow, return to hibernation, it is believed that winter will last for another six weeks.

Sound familiar? A similar custom exists where Candlemas is celebrated on February 2nd.

In German countries it included badgers, and from the German immigrants in Pennsylvania comes the Groundhog Day in the town of Punxsutawney.

CULTURE RE-VIEW: A look back at this day in history