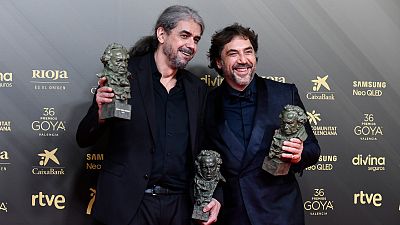 The Spanish Film Academy celebrated the 36th Goya Awards in Valencia on Saturday, where one particular film was a clear favourite because of its record number of nominations.

El Buen Patrón or The Good Boss, the ceremony's most nominated film ever with 20, won six of them -- including best actor for Javier Bardem, who paid tribute to his wife Penelope Cruz, who was in the audience.

"I want to dedicate this award to Penelope who is the woman I love, respect, admire and celebrate every day," Bardem said in his acceptance speech.

In her speech, Blanchett paid tribute to Spanish cinema and praised its efforts to make films despite the pandemic.

The best European Film Goya went to Another Round by Thomas Vinterberg (Denmark), while the best Ibero-American film Goya went to Patricio Guzman's The Mountain Range of Dreams (Chile).

Tim Burton lights up the Festival Lumière in Lyon