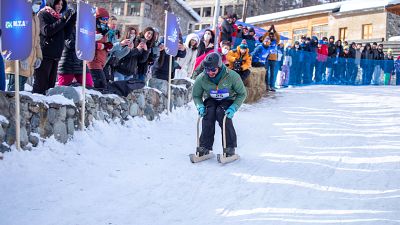 28 participants tried to prove their-skating skills racing against the clock during the icy descent.

The race – a reimagining of Georgia's tradition of covering mountainous distances on handmade 'Lukhmeds' – was dreamed up by local Leri Niguriani and his friend Andro Burduli.

Lukhmeds are a type of wooden ice skates which were hugely popular in the region during the 80s but have since faded away.

However, Niguriani and Burduli found themselves determined to revive it, with the help of the organisers at Red Bull.

'A couple of years ago, Andro and I were ski-touring with the group in the village Etseri, where we saw children skiing with Lukhmeds. That was kind of a flashback to our childhood - we both used to ski with these wooden ski-skating devices," reveals Niguriani.

"We thought that this tradition may turn into a fun event nowadays."

"With the first snowdrop, all the children from my village gathered on the hillock, traced the path and started to ski on Lukhmeds. No one taught us how to ski on these devices, it was all about the skills," he says.

It was a race against the clock, with one ice-skater per run on the course, and the participants also had the opportunity to win the trophy of the most creative outfit.

Those with the fastest times returned home armed with a Red Bull trophy and a cash prize.

"Winning the competition is very important indeed, but most important is that the tradition is revived," says Lasha Shukvani, who took the victory with a time of 21.31 seconds.

"The happiness from the fact that the younger generation have started to use these wooden ice-skates surpasses my joy of victory,' he add

Giorgi Jajvani finished second on 22.12 seconds, while Davit Pilpani finished just behind in third in less than half a second later.

Dressed up as a Viking, Davit Parjiani was also handed the prize for the most creative costume.

The success of the day leaves Mestia locals hopeful the 'Red Bull Lukvrame' become an annual addition on their calendars.

Check out the video above to see how the The 'Red Bull Lukvrame' brought Lukhmeds racing back to Georiga.