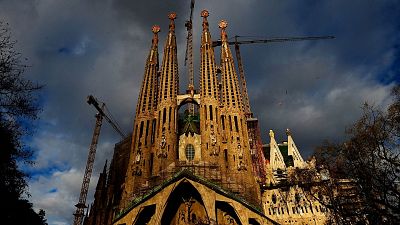 It has been 139 years since work began on La Sagrada Familia in Barcelona, and it still remains unfinished.

A UNESCO World Heritage Site, its incomplete status has not put off tourists and it still remains one of the most popular attractions in the city.

Plans however to finish it by 2026 using architectural plans originally drafted by its creator, Antoni Gaudí, have proved controversial as part of the construction may involve evicting up to 15,000 residents who live in the area.

Following months of eerie silence at one of Barcelona's busiest tourist spots, the basilica of the Sagrada Familia is coming back to life.

Before the COVID-19 pandemic, the neighbourhood around Antoni Gaudi's masterpiece was teeming with tourists and sightseeing buses.

Construction during the last decade had reached unprecedented speed and the goal was to finish the art nouveau masterpiece by 2026 to commemorate the centenary of Gaudi's death.

But with the end of the pandemic in sight, the exact date of completion remains uncertain.

Construction resumed at a slow pace in June 2021.

On December 8 the apse tower, dedicated to the Virgin Mary, was inaugurated with a big celebration including a live message from Pope Francis.

The new tower, the first to be completed since 1977, is the first of the six main towers of the gargantuan basilica.

The building board have set for 2022 a calendar of works that, if all goes as expected, will finish the two towers of the evangelists Luke and Mark and add three new upper levels to the main tower of Jesus Christ.

Why are 15,000 residents at risk of being evicted?

With work on the towers in progress, Sagrada Familia faces what could be its last and largest conflict.

Resuming the construction of the Glory façade, dedicated to the resurrection and ascension of Jesus Christ, comes in direct conflict with hundreds of homeowners living on the other side of narrow Mallorca Street.

Building the planned staircase that would serve as the main entrance to the building could mean demolishing several buildings and could see thousands evicted and forced to move somewhere else.

And, according to the city's existing urban zoning, these blocks are designated as green areas.

Green zones in Barcelona afford more priority to pedestrians and cyclists and are aimed at keeping traffic in the area to a minimum.

Talks and meetings between the basilica's building board, the local council and the affected neighbours started right before the onset of the pandemic.

To the neighbours, the COVID crisis came as a blessing as the 2026 date of completion was no longer an immediate threat.

Salvador Barroso is the president of 'People Affected by the Construction of the Sagrada Familia'.

Barroso says that two entire blocks housing over 3,000 homes could be demolished - and up to 15,000 local residents evicted from their homes.

The platform was started four years ago and it's backed by 90 per cent of the families affected.

They're worried not only about a possible eviction but also a lack of control over the number of tourists in the area.

"Our proposal both for the city hall and the board of construction is that we are very comfortable in our homes. Which we have paid for and are totally legal," he says.

Barroso and his associates complain that the latest additions to the basilica, rather than Gaudi's original ideas, are interpretations that will turn the building into a theme park.

But chief architect of the Sagrada Familia, Jordi Fauli, says construction work is based on the architect's plaster models, and photos and publications of his original drawings, which were destroyed in a 1930s fire, according to the Sagrada Familia foundation.

"There aren't magical solutions here. We don't think that in order to finish the basilica all buildings involved must be demolished. But we also think it isn't likely that all buildings will be saved," says Janet Sanz, Barcelona's deputy mayor for ecology, town planning, infrastructure and mobility.

New meetings and talks are being held to give certainty to all parties involved.

Sanz expects the problem to be resolved by May 2023.

Check out the video above to learn more about the dispute

Everything that happened at the BRIT Awards 2022

Ladino: Meet the guardian of a Jewish language close to extinction